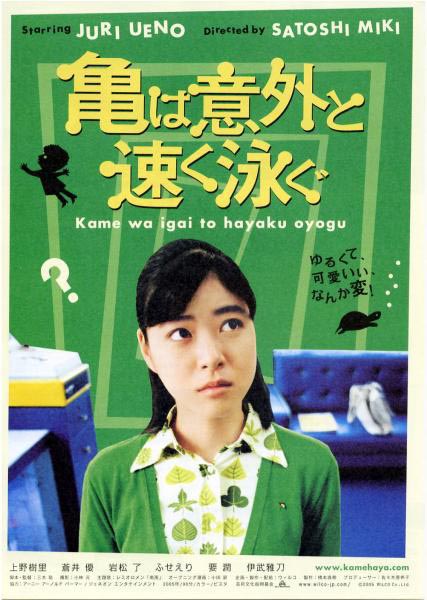 Suzume Katagura (Juri Ueno) is an ordinary housewife.Her husband has been sent overseas on business, and although he phones her regularly, he is more concerned with the health and welfare of his pet turtle. The days pass by monotonously… It is as though no one pays her any attention – even her husband. “Does anyone notice me? Will I just get old, and die?”

The ordinariness of her life is interrupted one day when she spots a flier in the stairwell advertising for spies! Intrigued, Suzume phones the number. Three days later, Suzume is instructed to go to a run down apartment. She is greeted by a man and a woman – he is unemployed; she is a shopping mall announcer. They claim to be spies working for a foreign state. Just like Suzume, they are ordinary people with ordinary lives. The couple persuades Suzume to become a spy too. They virtually force the 5 million yen first mission fee on to Suzume and so begins her life as a spy! ace Oct 24 2014 2:32 am I watched this because Yū Aoi was in it. But even though she is only in it briefly, I still found myself liking this odd little film. It was rather slow and not a lot really happens. But that is ok. The cast is great and it is a pleasant way to kill some time.