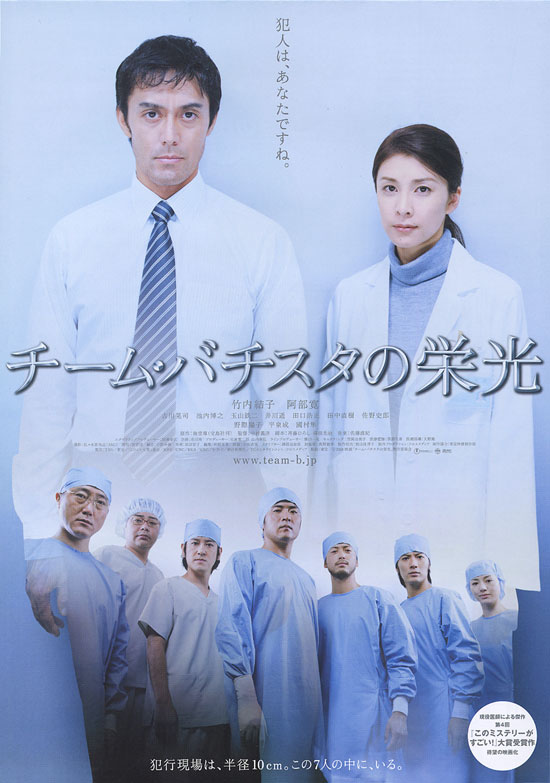 Ever since Tojo University Hospital established Team Batista-a group of doctors specializing in the Batista procedure, an alternative therapy to heart transplant-the team had scored one success after another. But suddenly three consecutive operations conducted by the team end up with the death of the patients. The hospital launches an in-house investigation and sends in Kohei Taguchi, perennial professor of neurological medicine and head of the Unspecific Complaints clinic. Ki Nov 23 2008 12:08 am “The Glorious Team Batista” is a film set in a Tokyo hospital and covers a group of elite surgeons. But, rather than being a straight medical film, “The Glorious Team Batista”, is more of a classic murder mystery, spliced with family friendly humor. The humor has the feel of something that you might see on Japanese television and there’s a good reason why. The movie was produced by television station “TBS” (nope not the one started by Ted Turner, but the one also known as “Tokyo Broadcasting Station”) and that’s not to take anything away from the film. After all, such impressive films as “Memories of Matsuko,” “Kamikaze Girls,” and “Stranger of Mine” were all produced by TBS’ movie shingle. Although “Team Batista” is a few notches below those prior films mentioned, it’s still a very entertaining movie, highlighted by appealing performances by Yuko Takeuchi and Hiroshi Abe.

Tojo University Hospital’s pride and joy is “Team Batista”. This top notch group of doctors and nurses has mastered the Batista procedure - an alternative to heart transplants. The normal success rate for the Batista procedure is 60%, but Team Batista has pulled off 26 consecutive successful operations. Unfortunately, things don’t always stay peachy in bento boxed land, as the next three procedures all results in the patients’ death.

Because of the sudden failures, Hospital chief Gonta Takashina (Jun Kunimura) launches an internal investigation. Hospital therapist Kohei Taguchi (Yuko Takeuchi) is assigned the task of uncovering the truth and she’s up for a lot more than she bargained for.

Naive going into the investigation, Kohei Taguchi interviews all of the Batista members and eventually chalks up the failures to unexplainable accidents. But, the investigation isn’t quite finished yet. Keisuke Shiratori (Hiroshi Abe) from the Ministry of Health & Labor arrives at the scene and re-launches the investigation with fervor. He suspects nothing less than murder occurred during those failed operations and is willing to use any means necessary to prove it.

The squeamish should be aware, “The Glorious Team Batista” features a healthy dose of realistic incisions and extractions when depicting the Batista procedure. This is done to good effect and succeeds in giving the film an air of credibility. Somewhere along the 35-45 minute mark, Hiroshi Abe comes into the picture and the movie evokes more comedic flair, reducing the realistic tone of the early portions of the film. Throughout this shift, Yuko Takeuchi provides a constant, always having a warm, bumbling persona that made me fall for her performance.

While the film works the “who done it” angle with reasonable success, the answers when given come completely out of left field. Real clues on the actual murderer are never given until the curtains are drawn. This obviously lessons the impact of the mystery angle, but it’s not quite a deal breaker. Half of the appeal of the movie is watching the investigation itself and, in particular, the interaction between Yuko Takeuchi and Hiroshi Abe. Hiroshi Abe, by now, portrays a character we have seen many times before, but this doesn’t lesson the charisma he is able to portray on screen. With Yuko Takeuchi, like I said before, I just wanted to take her home and introduce her to my parents.

When its all said and done, there’s a fine build up in “The Glorious Team Batista,” but the pay-off doesn’t quite live up to expectations. Even with the less than overwhelming ending, Team Batista is still a lot of fun to watch. If you’re at all curious about hospital life, Team Batista gives a decent introduction into that world and even if you could care less about that angle, there’s still a genuinely interesting human story involving Kohei Taguchi’s development from a naive therapist to a more well-rounded and knowledgeable person in life. “The Glorious Team Batista” provides a lot of popcorn fun, especially so if you are a fan of popular Japanese cinema.