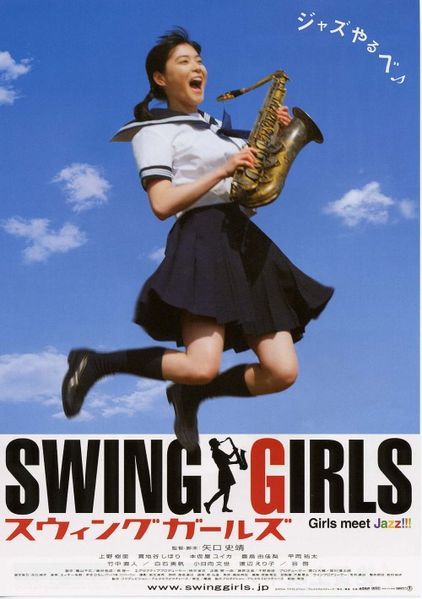 Tomoko and her classmates are given a reprieve from their dreary summer math class with the job of delivering lunch to their high school brass team. Unfortunately the girls fall asleep on the train and miss their intended stop. They get off at the next available stop, but then they still had to walk a considerable distance in the baking sun to get to the stadium. By the time the girls got to the stadium and delivered the food, something strange happened. All the members of the brass team got sick, except for Nakamura (the girls ate his lunch while riding on the train). The following day, Nakamura is left to reassemble the brass club, but only 3 girls show up for the auditions. 2 are heavy metal rock girls that bring their amps and guitar and bass. The other girl seems promising but brings a flute. Nakamura soon sees the girls from the math class, that delivered the lunch late, laughing in the hallway. He demands that they join the brass band or he will tell the faculty that the food wasn’t spoiled from the factory but that the girls were at fault. The girls soon enough agreed, partially because of the threat and partially to avoid the monotony of taking summer math classes. The girls have no clue how to play and they are in terrible physical condtition. Nakamura takes it upon himself to train the girls, first with physical exercises to improve their stamina and then teaches them how to play their brass instruments. There is only a week until the next game begins and the girls start to enjoy playing their instruments immensely. Unfortunately the original brass team recovers from their illnesses and rejoins bthe brass team. The girls are now left without a club to play their music for or have any instruments to play with in their free time. After some moments of despair, the girls take the initiative to start their own Jazz band and they call themselves Swing Girls (And A Boy). Along with the help of their math teacher, who is somewhat of a Jazz aficionado, the girls train vigorously to compete in the upcoming student music festival. Dean Sep 07 2019 4:17 pm Hi Rich, several of them have followed through their acting career, but not a musical one. They were not musicians to start. Ueno Juri is a successful actress. Kajiya Shihori is a sexy fox in all her movies. Others have dropped off the face of the earth.

Rich Neumann --- Richand Center, WI Jun 26 2019 10:12 am I'm from the U.S. and played drums in a jazz band as a youngster. I just recently discovered the movie "Swing Girls" and have watched it numerous times since. How girls who had no musical experience metamorphosed into a competent jazz band is something to behold. I loved it!

If somebody can help me with my inquiry, I would really appreciate it ... and thank you very much.

erm Feb 17 2014 10:58 pm Epic! I'll replaying this movie for several times.. Their acting so entertaining and the music that performed by the actors themselves, are so complement this movie.. I loves the moment when they playing in the roof top on the school to record their audition performance for the festival.. Nakamura and Suzuki expressions when they play with the snow so really cute.. Nakamura is so prankable, then Suzuki is so riot and careless.. lol.. Anyway, the twist of this story remind us to always fighting.. Well, this movie is bring me to start loving swing and jazz..

Joshua Sep 15 2012 3:12 am I remembered Nodame Cantabile just for a second there, great movie and music

Ki Feb 01 2011 5:08 am Cute & charming movie that will have you dying with laughter and at other times, tapping your feet along with the music from the Swing Girls & A Boy. As soon as the girls decide to start their own band, the movie kind of steps into overdrive with absolutely hilarious scenes. The girls needed to raise money to buy their instruments and this is where the fun really begins. Juri Ueno who played Tomoko (the girl that takes the initiative to start the band) was a riot. When she saw the used saxophone of her dreams, she simply would not be denied. She replaced her sisters PS 2 video game console with a black Kleenex box, as well as the families iMac computer, to pawn off for the saxophone. The manner in which it was done was so funny. The movie is loaded with these types of humorous scenes, like when the girls decided to work at the grocery store to buy their instruments. Probably the funniest part of a very funny movie would have been when the girls and Nakamura were in the mountains picking mushrooms and stumble upon a wild boar. As the girls and Nakamura are being chased by the wild boar, the film uses a novel stop motion technique to show the expressions of the terrified kids, all the while Louis Armstrong’s "What A Wonderful World" plays in the background. Absolutely unforgettable scene! With all the drama that occurred with the Swing Girls’ preparation to compete in a National Student Music Festival, there were also budding romances that occurred between Nakamura and Tomoko, as well as between the Math teacher and the Brass Band instructor. Swing Girls is one of those movies that is damn near perfect in every way. Hell, after watching the movie, I wanted to put on some Dizzy Gillespie on the turntable and try my hand at the air trumpet. Awesome movie!

there are some funny scenes, made me laugh heartily..