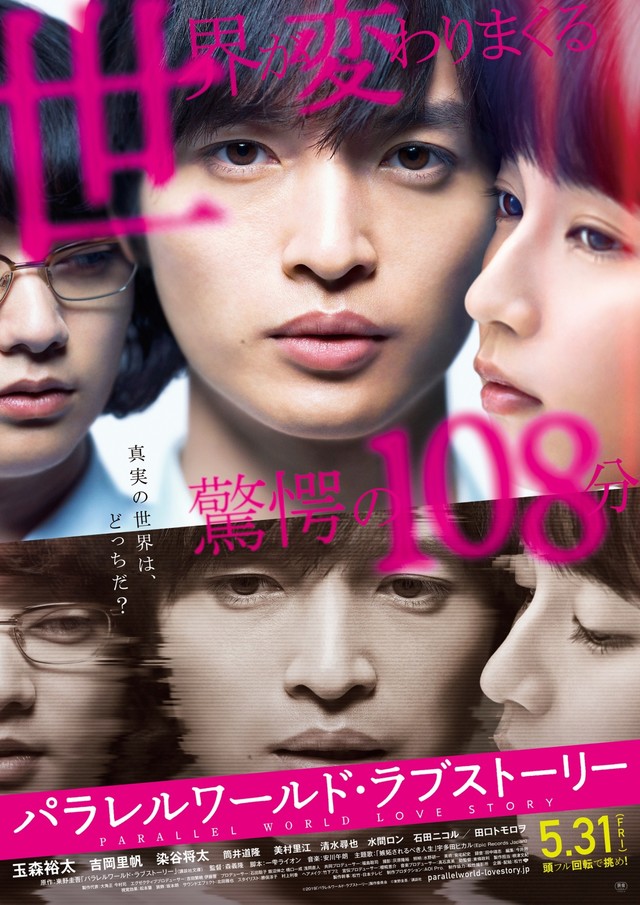 "A world" - After graduating from a university, close friends Takashi Tsuruga (Yuta Tamamori) and Tomohiko Miwa (Shota Sometani) begin work at a company which does brain research. One day, Tomohiko introduces Mayuko Tsuno (Riho Yoshioka) as his girlfriend. Takashi is stunned. When he was a university student, Takashi saw Mayuko Tsuno everyday on the train opposite from the one he rode. He became attracted to her back then.

"B world" - When Takashi Tsuruga wakes up, his girlfriend Mayuko Tsuno makes breakfast as usual at his apartment. His friend Tomohiko Miwa introduced him to Mayuko and they have lived happily as a couple. Everything seems to be going smoothly, but Takashi begins to have doubts. Tomohiko, who worked with him at the same company, disappears and he can't discern if his memory is real or imaginary.

I really loved the premise of this movie, and how misleading the plot summary and title was. I kinda expect the plottwist that his memory was rewritten, but for a mystery/romance movie, the story itself ain't that bad. I'm just glad that they haven't put the sci-fi tag on the genre lol or else it will give away all on what the story was about. And ftr, how they used neurophysics in here really hooked me up on the story.

james Feb 20 2020 3:41 pm I really liked this up until the moment he attacked her in her house. gross. My empathy/sympathy for the character at that moment hit rock bottom - or perhaps I'm supposed to emapthise with a guy that doesn't seem to understand the word "no"?