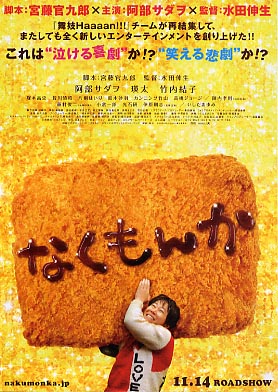 Two brothers were abandoned and separated when they were still small. Despite their unhappy childhood, they promise themselves that they will not cry and remain strong and optimistic…

The big brother, Yuta, was raised by the owner of a deli, and he works like crazy to show his gratitude to the adoptive father. He even does other menial chores for the people in the neighborhood, and becomes known as an ultimate people pleaser.

The little brother, Yusuke, is now half of a popular comic duo called the Kinjo Brothers. Even though the “Brothers” are not related at all, a tearjerker autobiography which contains completely false accounts of their childhood becomes the best-seller, and the fact that they’re not real brothers is a secret they work desperately to hide.

One day, Yuta accidentally finds Yusuke of the Kinjo Brothers is his brother. Believing his little brother would also want to see him, Yuta shows himself to Yusuke with excitement. However, Yusuke does not accept it, and… barahachi Feb 08 2012 11:28 pm Laugh and cry and then again then laugh and cry and be happy - that's the cycle. This movie makes me want to watch more movies starring Sadao Abe. I've only seen him in Iryu 1-3. He did very good in this movie as it might be challenging to cry and suddenly convince yourself to laugh. A round of applause to Abe-san! Yuko-san also did a good job here. I like how she portrayed her character too.