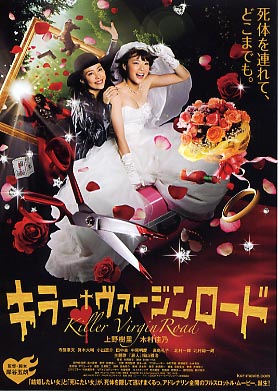 Hiroko (Juri Ueno) is about to get married to the handsome Kenichiro when disaster strikes. Her landlord stops by the happy bride-to-be’s apartment where a pair of wayward scissors falls from a shelf and stabs him in the back as he bends forward to pick something up. His body begins to stiffen even before Hiroko realizes what has happened.

On the road to Mount Fuji where Hiroko intends to dump the corpse, something falls on the hood of her car out of the blue. That “something” is Fukuko Kobayashi (Yoshino Kimura), who is dying to… die. Fukuko believes that she is irredeemably unhappy and has endeavored to commit suicide again and again. As Hiroko and Fukuko begin their journey to abandon the corpse, a weird friendship begins to build.

After many twists and turns, Hiroko walks down the aisle. An airmail delivery arrives for the happy honeymooner, but when Hiroko opens the envelope, the paperknife slips from her hand and it ends up stabbing Kenichiro in the chest. Again, after putting the corpse in her luggage, Hiroko has to run away, but unlike the last time, she is full of hope. japanised Dec 30 2010 12:15 am this movie is freaking funny!i've been waiting for this movie to be open in online websites but still it is not. but i still was able to watch it nyahahaha! i love the adventures of kobayashi and hiroko with the biker gang!

dramafreak1 Oct 02 2010 11:49 pm it was the best japanese movie i've watched too - everything was just so great about it!!! but it was kind of unexpected for me...... i have to say i wasn't eager to watch it because of all the wacky characters, but after i did, i was sooo impressed. i definitely recommend this to anyone who is looking for a good laugh (Y)

jango Sep 15 2009 12:10 am so far this is the best Japanese movie I've watched and the best ueno juri movie ever^^ I love it haha juri's dance moves is epic on this movie

Raku Oct 15 2008 2:01 pm Yeah I know it does sound great and what great choices for the lead roles!, only started filming last week.