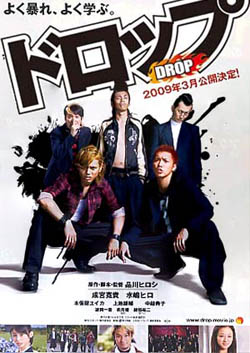 "Drop" tells the story of a boy named Shinanogawa Hiroshi (Hiroki Narimiya) , who grew up in the 1980s. He became inspired by the Be-Bop High School manga and decided to become a delinquent. Hiroshi dropped out of a private middle school and transferred to a public school. With his hair in a very shot hairstyle dyed to red, he attracts the attention of the schools gang lead by Iguchi Tatsuya (Hiro Mizushima). After a fight with Tatsuya, Hiroshi ends up joining their delinquent gang. What follows is the story of friendship and making the right choices. Danny-Saki-CoCo Mar 21 2013 10:06 am Back when I was starting to get into Japanese culture this is one of the first action movies I have seen from Japan and I got to say I felt as if this was a really kick ass movie involving a gang but what I liked about it the most is that unlike other gang Japanese movies where the gang was perfectly tough this one had flaws, and showed the realistic factor of being in a gang. 5 out of 5. 戻る私は日本文化に取得し始めたときに、これは私が日本から見てきた最初のアクション映画の一つですし、私はそれについてのほとんどを好きなもの、私はこれがギャングが関与本当にガツンと来る映画でしたかのように感じたと言うようになったけどギャングは完全にタフだった他のギャング日本の映画とは異なり、この1は欠陥があったが、ギャングにいるかのような現実的な因子を示したことです。 55点満点。

Enzo Sep 07 2012 12:24 am Awesome film. Compared to the films coming out today, this was original. I would love to see some more films by the people who made this one. I have never watched any Japanese films and for my first, I am definitely going to recommend this to others.

Scarface Nov 18 2011 9:46 pm I purchased this movie from HMV here in Canada for $12. I saw this movie on sale on the HMV website and decided to watch the trailer to see what it was all about. I quickly concluded that it was going to be another movie similar to Crows 0 (Crows Zero is one of my favourite Jap delinquents movie). This movie is no way similar to Crows, and all of the protagonists battles are all losing ones. Nevertheless it shines in its own way and is my third favourite movie (Crows 0 part 2, Crows 0).

fujinakaheero Jul 25 2011 9:31 am Honestly, this movie was really good. Surprisingly they just released this video here in canada just a little while back, I finally ended up getting it. I enjoyed it a lot, I normally don't watch this kind of stuff often, I'm more of the shojo type, but it was definitely worth the money. I'd recommmend it. Plus I watched it for Hiro and Hiroki, as I've seen quite a few of their dramas, they're great actors. :D

IWllEatYouAlive Dec 05 2010 7:48 pm Don't compare this movie to another movie just because it has the same features, this movie was really good, besides there aren't very many gokudo type films out there. Enjoy what you can get.

platothelapdog May 25 2010 12:24 am Boy wants to become man by becoming a yob. Live your dream, but the dream of a great movie is low. Crows 0 better, still enjoyable.

genjiOFgps Mar 23 2010 8:24 am some say..this movie related to the CROWS ZERO ..but i think..which is not very true..coz i have seen it..there's no connection between BE-BOP HIGHSCHOOL and SUZURAN ALL-BOYS..plus there are no character that are in CROWS ZERO on this movie..accept HIDESHI and the gota washio guy.. when this movie was release ..i was so impressed how the student of that school managed to beat up 50 people.. and the way that tatsuya will power to gain respect..has no limit..

So, is some group going to sub this or what? English subs included on the DVD?

Simeon Domingo Torres Sy May 04 2009 4:18 am I am a verry big fan of the manga version and watching the trailer itself, makes me want to watch the whole movie, I was wonderring, how can you download the entire movie? I am very anxious to see this film.