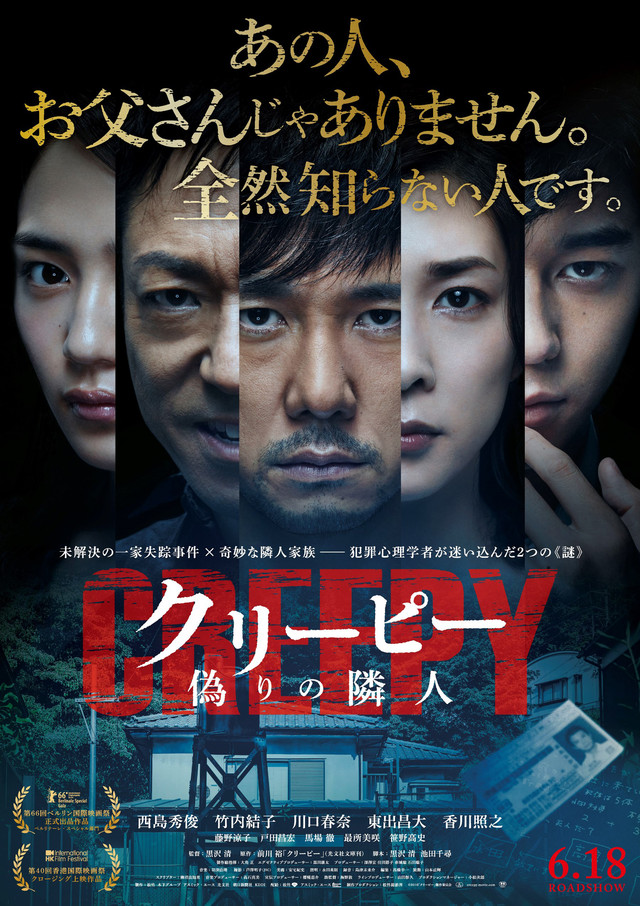 Takakura (Hidetoshi Nishijima) is a former detective. He receives a request from his ex-colleague, Nogami (Masahiro Higashide), to examine a missing family case that occurred 6 years earlier. Takakura follows Saki's (Haruna Kawaguchi) memory. She is the only surviving family member from the case.

Meanwhile, Takakura and his wife Yasuko (Yuko Takeuchi) recently moved into a new home. Their neighbor, Nishino (Teruyuki Kagawa), has a sick wife and a young teen daughter. One day, the daughter, Mio, jumps into Takakura's house and tells him that the man is not her father and she doesn't know him at all.

Jpoper Jan 12 2020 3:41 am I just want to share my concern about this movie. There are many recklessness made by the characters in this movie but I oversaw it but at the end of the movie, it just doesn't make sense anymore.

I mean at the first scene, why is the security lax? Considering that person murdered 8 people. He should atleast hancuffed.

bad Oct 16 2017 11:34 am story was good (but going nowhere), everything else is bad. everyone is stupid and they lack commonsense. bad movie. waste my time watching this.

Ioneha Mar 25 2017 4:44 pm If you overthink it and compare it to the knowledge you may already have on the subject matter in this movie,you probably won't enjoy it.

That being said,it you just watch it for the ride and intrigue that comes with Japanese thrillers,you may come to find that the film really does live up to its title.

Toan Jan 21 2017 9:45 pm Has to the dumbest characters in any movie I've ever witness. So many stupid decisions and lack of motor skills to do even the simplest action. Who stands there staring when someone uses their house key and opens their door repeatedly?? Who stops obediently and gives their hand when a goddamn psycho tells them to?? I started wanting them to be killed off eventually. Sigh what a waste of time.

Niiki Jan 14 2017 10:24 am Best film ive seen all year, such an amazing intense and suspenseful storyline with great acting and love the darkness of the film, highly reccomend this.

Clueless Dec 30 2016 10:17 pm I'm really clueless what happened on the ending. I thought all of them became some sort of a psychopath. Can someone really explain what really happened?

Disappointed Dec 12 2016 9:03 am I feel frustrated throughout watching the whole movie and right before the emotional ending I thought that none of the characters deserved my sympathy because they didn't try hard enough to resist the psychopath. The movie itself was decent for a thriller but I was looking for something smart and less frustrating :p

Nikki Dec 03 2016 9:39 am HOLY CRAP. I just saw this in the cinema today and it was absolutely mindblowing. I can't reccommend this to people enough, it is all kinds of effed up but in a good way. Holy moly, this movie is going to stick with me forever, definitely one of my favorites.

toma Dec 18 2015 11:17 pm Hidetoshi has played some amazing movies but im watching this movie for sure since story line is a mystery and a curious one