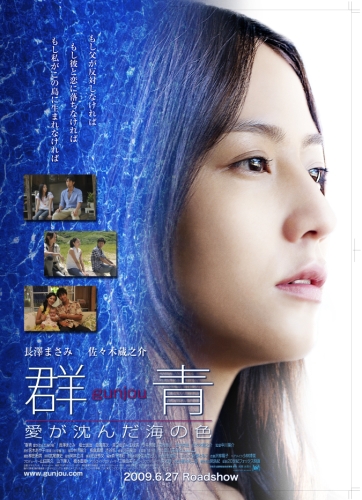 Cobalt Blue is the story of three childhood friends—Ryoko (Masami Nagasawa), Kazuya (Shinji Rachi), and Daisuke (Seiji Fukushi)—who grow up together on a remote island of Okinawa.

Ryoko’s mother, Yukiko Morishita (Misato Tanaka), is a world-renowned pianist who arrives from Tokyo to recuperate from an illness.

She falls in love with a fisherman, Ryuji Nakamura, then marries him and gives birth to their daughter Ryoko shortly before passing away.

Two boys, Daisuke and Kazuya, are born the same year as Ryoko, and the three children grow up like brothers and sisters, but as they near adulthood, they each begin heading toward their own separate paths. Kazuya decides to remain on the island to become a fisherman, while Daisuke is accepted into an art school in Naha (on the main island of Okinawa), and Ryoko considers leaving the island to study nursing. But during the spring of their 18th year, Kazuya sings a song of love, “Tubarama,” to Ryoko, forever changing the relationship between the three friends...