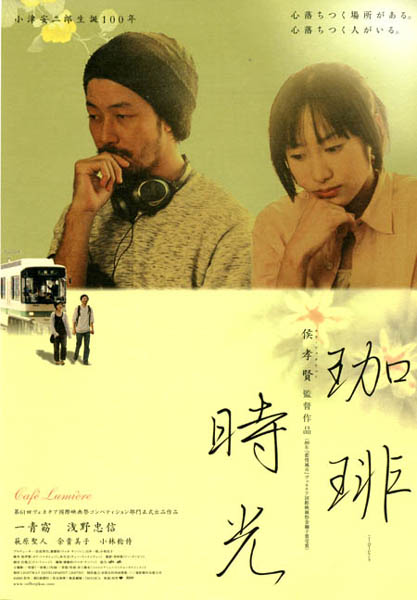 Yoko (a wonderfully natural screen debut from singer Yo Hitoto) is in many ways a typical young Japanese woman: living alone in Tokyo, independent-minded, busy with her work (she's researching the life of the Taiwan-born composer Jiang Wenye, famous in the 1930s and now coming back into fashion) and sustained by her rural parents and a network of friends. Her one problem is equally ordinary: she's pregnant by a boyfriend she doesn't want to marry.

Using even less narrative than he did in Millennium Mambo, Hou Hsiao-Hsien again makes a touchstone from the life of one young woman. Café Lumière tangles together personal and cultural memories, history, fragile relationships with family and friends and differing ideas about conception and birth to come up with a a very precise image of living in the present. If this sounds vaguely Ozu-esque, that would be because it was commissioned and made to mark the centenary of Ozu's birth. But Hou (working for the first time with Japanese stars: Hagiwara Masato and the ubiquitous Asano Tadanobu) doesn't try to copy Ozu's style. While respecting Ozu's unhurried pace and emphasis on the everyday--not to mention his passion for Japan's railways--Hou pursues his own quest for a genuinely modernist cinema. The film's Japanese title drops the right hints: it means Coffee, Time and Light.