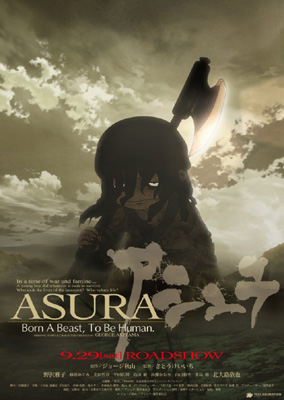 Set in war torn mid-15th century Japan, a boy named Asura was born a beast. A young girl named Wakasa helps to tame Asura and help foster his human side. Asura grows up to become a high preist and help guide lost souls to heaven. Chi-Chan Jun 14 2013 1:03 am amazing AMAZING one more time to reiterate AMAZING movie but movies with "messages" dont really speak to me like that being preached to some may go oh I hate that because they simply dont want to be told the truth but for me I dont want to hear it because its just plain hypocrisy and this is nothing but a lie asura represented (in my mind) what humanity really is and that humanity is nothing but liars that deserve the suffering brought onto them and if you want to survive either live through a facade or rely and trust solely on yourself because every human no matter how innocent appearing there all liars there all cheats and they all have a secret everyone is evil in some way shape or form they just deny it because they cant accept it anyone that argues that is lying to themselves

Mary Ho Jun 20 2012 8:12 am I just watched this dark anime at Shanghai film festival.. Though some parts were violent, the story had beautiful and meaningful messages which i found to be spiritual .. A deeper understanding of being a human being and the will to live..Should win awards for graphics