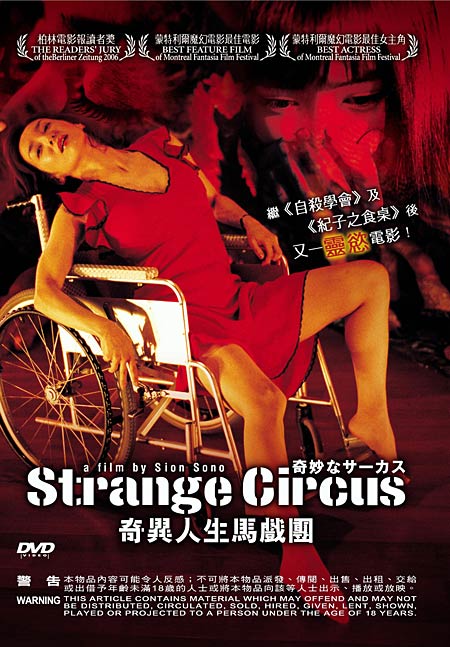 Strange Circus is for everyone who thought that Sion Sono’s previous film Suicide Club was just too "normal." This year’s most challenging title, Strange Circus is a surreal shockfest that just gets more disturbing as it progresses down its increasingly hallucinatory path, and much of the audience is likely to be reeling… even before the amputations, bondage imprisonment or secret transsexuality. Welcome back, Sion Sono! Adolescent Mitsuko is forced to watch her parents’ lovemaking by her perverted father and her domineering mother, who imprison her in a cello case employed with a peephole. When Mitsuko’s mother apparently dies, her father forces the girl to be the victim of his incestuous desires, which drives her to attempt suicide with a leap from a height… yet all of this is apparently just the new novel being penned by reclusive, wheelchair-bound author Taeko (Masumi Miyazaki, who also plays the mother). Or is it? Taeko is assigned a new assistant, effeminate admirer Yuji, and the two begin a sexual relationship in Taeko’s ornately designed estate. But we soon must question the real identities of both Taeko and Yuji. Sono isn’t necessarily any more concerned with providing easy answers here than he was in Suicide Club, but like that film, Strange Circus is an often shocking, always bizarre cinematic ride for the adventurous.