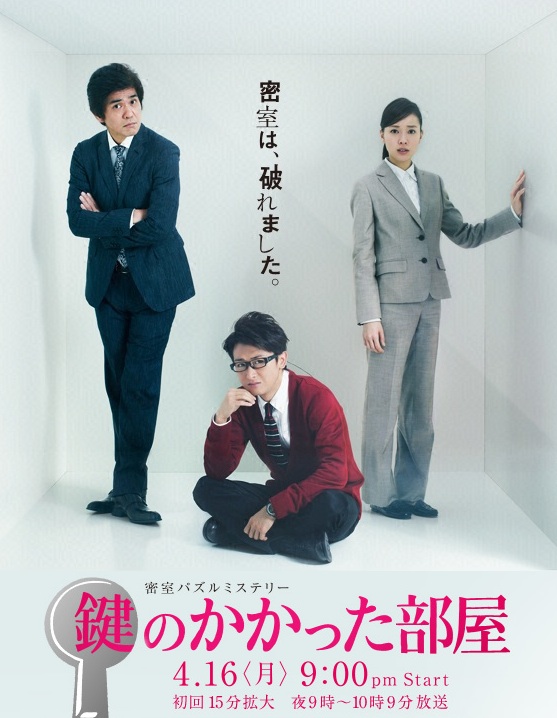 Kei Enomoto (Satoshi Ono) works for a Tokyo based security company. By the request of attorney Junko Aoto (Erika Toda)'s, Kei Enomoto goes to the scene of a locked-room incident with Junko Aoto's senior attorney Gou Serizawa (Koichi Sato). The locked-room case involves the death of Ooishi, the president of a funeral company. Ooishi's body was found in a locked room of a mountain villa. The police concluded that his death was by suicide, due to his room being locked and the fact that Ooishi was suffering from terminal cancer. However, Ooishi's friend Maruyama and notary Kusakabe (Keisuke Horibe) doubt that his death was by suicide and asked Gou Serizawa to investigate. Now, Kusakabe takes Kei Enomoto and Gou Serizawa to the mountain villa and explains what transpired the day Ooishi's body was found.

Nagoli67 May 06 2019 12:07 am I love this drama so much. I was expecting an equally good performance out of elika in Kagi no Kakatta Heya, but she was rather undazzling in this role.

Lately I start to watch Japanese TV dramas. This is the first one. I have chosen the next one to watch on nihofun.com called legal high 1.

LiluRin Apr 02 2013 3:09 pm I love this drama so much! Every episode was so enjoyable. Especially the Enomoto/Aota moments ^-^ Toda Erika is super cute and I really like Ohno's character. He's so cool! :) Hopefully, there will be a season 2.

UedaNaoko Mar 24 2013 8:04 pm Sugoii! I super love this drama now after realizing what they did to me on the ending. Lol! It's funny, thrilling and totally mysterious. The ending makes me want to rewatch it in the new light. A must watch dorama. Ohno, Erika at Sato-san are totally incredible in this. I love their interactions and Team Enomoto is the best detective ever. :P

OhToda Jun 18 2012 10:35 am Best drama ever!!! hoping that will be continued Satoshi and Erika were perfect pairing so funny to saw Satoshi acted like that :D