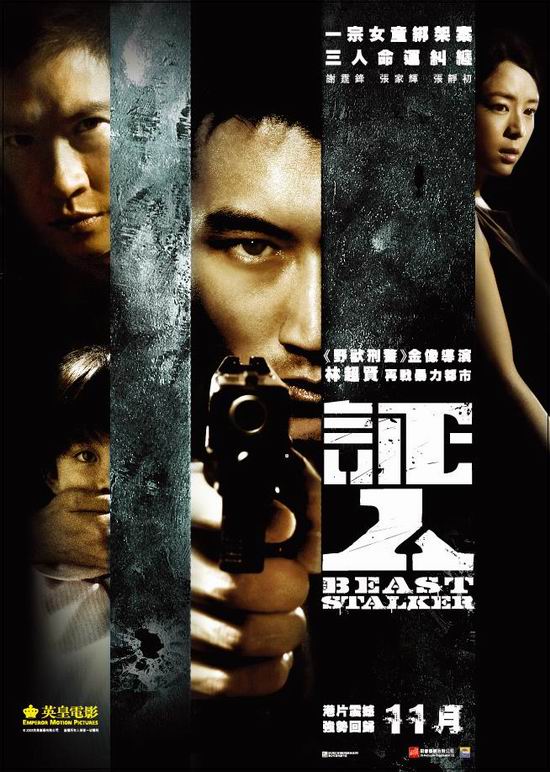 A traffic accident changed their lives forever. In capturing wanted criminal Zhang Yidong, Sergeant Tang Fei (Nicholas Tse) was involved in a gunfight and car accident that put the criminal in a coma. But in the process he also crippled an fellow officer, and mistakenly shot dead the elder daughter of public prosecutor and single mother Gao Min (Zhang Jingchu). Unable to handle the guilt, Tang Fei succumbs to a fog of pain. Gao Min, meanwhile, pours all her love and attention to her younger daughter Ling. Three months later, the criminal Zhang Yidong awakens from his coma. Gao Min, who had been working hard on bringing him to justice, insists he stand trial immediately.

Review by Neo: Ever since directing Beast Cop, Dante Lam seems to have gone brainless, but with exactly a decade onwards, Lam is finally delivering in Beast Stalker. Although the material does not bombard anything about freshness, there is no reason to be negative, as there are plenty of moments of reasonable excitement to make it one of the better lights of 2008 HK Cinema. While Beast Stalker is by all means dark, it is also lighter than Beast Cops, especially when taken into account of the somewhat redeeming finale. A good film by all means, but on the scale of Lam’s best efforts (Neo mentioning Beast Cop for X number of times), it pales. Luckily, the above is more of a positive comment than negative, as any film worthy of comparison with the aforementioned flick cannot be too bad.

Even the current reviewer is annoyed by how many times, Neo have somewhat mentioned the word, Beast Cop. For god sake, this is not a promotional fest of former great movies, but rather looking at the future of HK cinema, with a view of the past. Years, ago back in Tiramisu, Nicholas Tse portrayed himself as a somewhat capable actor and from there, he has gone from worst to bad. Luckily, Tse has finally come of age and the result is showing in a somewhat pleasing display of serious acting chops. Still, there are a lot of cons that would require mentioning, like moments of Tse being angry or frustrated comes of more laughable than convincing. Without being a pessimist there is a lot to cheer about Tse’s latest display and Neo can safely claim it as one of his best display since Goddess of Mercy.

There is no question that Nick Cheung is one heck of an actor and his steer away from comedy is certainly one of the best career moves for Cheung. It has been noted, that Neo first realise his potential as a serious actor way back in 1998, when he was actively involved in TVB. His role as a good guy turned villain was menacing and in recent years, Cheung has shown that Neo was right about him. Here, his villainous turn is by no means the typical carbon copy, but rather multi-dimensional and the result is menacing, interesting and absolutely captivating. Cheung has come a long way and perhaps award recognition is just around the corner.

There is a saying when all actors are in their best form, the film usually works. Well, to be honest, there is no such saying, but it does rings quite true. Luckily, good things usually come in three and surely one of the better actresses in recent years, Zhang Jing Chu (The Protege), can do no wrong. After Neo acclaiming her as Best Actress for her immensely scene stealing role as a junkie mother in Protege, Zhang does not disappoint and she handles her role with ease, While by no means on the same class as her performance in Protege, it is still more than adequate enough to allow the audience to relate to her character. An actress to watch in years to come and the scene when she realise she has indirectly caused the death of her own child is just captivating to endure.

Director Dante Lam loves brutal straight forward, fist to fist fights and he makes good use of this to further enhance the realism of the work. Beast Stalker works because; Dante Lam tries hard to focus on the characters and allows them to flourish. All in all, Beast Stalker is suitably dark, filled with three capable performances and a redeeming finale to round it out. While it is true that the film falls short of reaching the dazzling heights in Beast Cop, it is great news to announce that director Lam is back to what he does best and finally approaching the sort of form that seem to have eluded from his wane, for the last decade. Basically, cutting all the above crap, it really just requires the following line: a film that Neo recommends viewing … (Neo 2009)