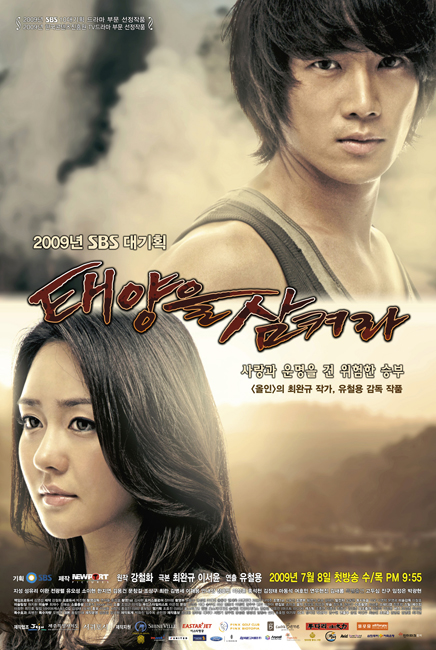 "Swallow the Sun" revolves around three young people in Jeju Island and how they develop Seogwipo, Jeju into a world city.

Jeong-woo Kim (Ji Seong) is the illegitimate child of a gangster father and a haenyeo (a traditional freediver) mother. He was raised in an orphanage and soon developed a rebellious temperament. Jeong-woo, an orphaned child, grows up on the rough side of the streets, and becomes a small-time hoodlum. When he saves the life of the rich and powerful president of a large corporation, it becomes his ticket to a better life. The chairman send him to Seoul to look after his son, Tae-hyeok.

Su-hyeon Lee (Seong Yu-Ri) has a strong will and is focused on achieving her goals. She overcame many unfortunate situations in her life to first study overseas and then become the organizer for a world famous performance team.

Tae-hyeok (Lee Wan) was raised without ever knowing his father. After he entered adulthood, Tae-hyeok meets Min-ho Jeong, a wealthy businessman, who claims to be his father. This changes Tae-hyeok's life entirely as he now works to excel in business management.

Tae-hyeok (Lee Wan) only wants one thing from him - to help him win the heart of the woman named Su-hyeon. Jeong-woo will do anything to win favor with the President's family, unfortunately, the woman Tae-hyeok loves turns out to be Jeong-woo's first love. Soo Hyuk, who doesn't remember Jeong-woo, finds herself gradually drawn to him as he pursues her under his master's name.

After learning the devastating truth of his father's true identity, Jeong-woo is set on a whirlwind of a quest involving crime, love and revenge, taking him from the glittering lights of Vegas to the diamond mines of Africa.

Shot everywhere from Las Vegas to Jeju Island, Swallow the Sun is the first k-drama to shoot in Africa, as well as impressively shot with Cirque du Soleil in its quest to bring the Kang Chul-Hwa novel vividly to life.

Jay G Apr 25 2021 3:10 pm Wow. Just read that some scenes were shot in my country, South Africa. That's all I need to know to search for it and watch it. The fact that Ji Sung leads the cast is even more meaningful as he's one of my favourite actors after I watched Doctor John.

Piscesqueenie Jan 03 2021 3:07 am Just finished watched this movie after Ji Sung marathon drama :) I enjoyed this drama, saw different role when Ji Sung younger. He surely put lots of effort and training for this movie. A slight twist to keep us engaged, even for some the story feels too much flashbacks. Beautiful soundtracks along the show too

Marizze Jul 03 2019 8:42 am What Ji Sung most i like is that his a good actor. His versatile acting really brings me a satisfaction as a Kdrama addict. The beautiful and talented actress Sung Yu Ri ... The cast ⭐⭐⭐⭐⭐ The music, feels me to inlove once again.

Thank you , such a wonderful story.

Shosh May 13 2019 12:07 pm I watched this drama 5 times, and the song is timeless Ji Sung is an excellent actor and the whoever chose the actors and actresses did an excellent job. I hav to admit that the Korean are the best drama producers. The best!!!

Ssozi israel Nov 01 2018 5:23 pm The movie is so touching . Am so in love with it thanks director and all the actors love you alot

anna Dec 26 2017 4:04 pm @Dillycat ji sung not playing in innocent man ?this why the negative impression you got ..i recommend you you to watch his other dramas like kill me heal me, secret, defendant and his history dramas are also well made " kim soo ru" and" the great seer" i Grant you that you will fall for him even more

Dillycat Dec 16 2017 4:07 pm Ok always used to push this drama aside even though I really like Sung Yuri, but can’t stand Ji Sung. Bad impression of him from All In and Innocence Man. So by chance have nothing to watch and decide md to give it a try. I was blown away on Ji Sung emotional acting!! He is good which make the chemistry with Yuri more endearing and beautiful. The storyline is not you topical love story but more of a character build up kind of story. Disappointed that Yuri didn’t shine as much as she did in Snow Queen and Feast of God, In the end I wish they made her stronger and more interesting to say the least. Overall it is a must watch for the deepest love Ji Sung character have for Yuri character, lots of tears and heart wrenching scenes. I say I’d watch this over 20 x in a spand of two weeks! Don’t get me started! Lol

whynot May 28 2016 12:20 am good drama. solid script.Ji Sung is perfect as always. Strong, emotional performance by Jeon Kwang-Leol. Just the female lead is so flat, not due to the script but due to poor acting.

paul nizzy Mar 21 2016 1:55 am the movie is very moral and interested such as people to how to run things when its get for revenge

Pammo Apr 25 2015 3:56 pm Unique K drama. Well worth watching all the 25 episodes. The story line is interesting, the acting is superb, and the scenery is gorgeous. This is an action romance drama and it never fails or disappoint. I didn't mind the 25 episodes - English is spoken properly, there is ethnic diversity of actors and actresses (not all Korean) and imagination by the writers. I put it in my rop 20 for entertainment value. Since I watched 108 episodes of SuBeak Daughter 26 seems minor. Ji Sung from Kill me Heal me was the lead actor and his acting continues to be amazing.

knj_s Apr 12 2015 2:37 am First, this drama is quite long.I understand why some people would not like this drama at some point.The story is quite slow, but after 2 or 3 episodes, the story gradually become interesting.I was hesitant too at first If I am going to watch this (since 24 episodes is too long for me), but to my surprise, I came to like it.This is the longest drama I have watched actually. The plot is great, especially the last few episodes. I won't recommend this but rather say try this drama until maybe episode 3, then decide.Good Luck!

Woggle May 18 2014 7:49 am This show is pretty bad. Like most Korean dramas, the plot is very weak and there is too much emphasis on pretentiousness, being cool, etc. To make it worse, their rendition of "Blood Diamond" was absolutely disturbing...

Linda Nov 07 2013 1:27 am Was wondering if anyone can tell me which episode features the Las Vegas shoot. Was an extra when filming in Las Vegas and would like to watch that episode. Would really appreciate this information. Thanks

grannygoat May 29 2013 11:26 am This is one of the best kdrama series that I have watched out of 250 of them. My main reason for watching was to hear Kim Jae sing as he has an outstanding voice. I was not disappointed with the script and actors. Fell in love with Ji Sung and his beautiful body. All excellent actors in this production. I was especially impressed with how S. Africa and Las Vegas were worked in without detracting from the Korean part of the production. I watched the director's explanation of how it was made. He expressed a special tenderness for the lead actress' suffering in the African heat and what a trouper she was. My hat's off to those tender Korean men who are protective of their women. An excellent series. Thank you for the subtitles so those of us who need the English subtitles can watch such great Korean productions.

ocean Jan 23 2013 12:59 am No apologies, this was the most stupid kdrama I've ever seen. They shud have used their acting funds to take care of the drainage problems in korea. Stupid stupid movie.

Letisha Jan 05 2013 4:52 pm The intensity of Jin Goo's and Lim Jung Eun's performance is impressive. This is the first time I saw them in the screen, I'm disappointed that they appeared only in episode 1. Their acting exceeded that of the other lead actors with longer roles in the drama, I hope the movie industry gives due credit to their ability by giving them better lead roles. Sung Yu Ri is similarly impressive. More power to you Jin Goo, Lim Jung Eun, and Sung Yu Ri. The first episode of this drama is spectacular but episodes 2 to 14 are like movie tourism and boring. The core story is good but the details are not convincing. Transfer of ownership of a casino or any business is not valid by simply handing a piece of paper especially under duress. There are legal requirements for a document to be valid, the writer should research about the law and the director should hire a legal adviser. I did not like the ending, I think JMH should go to jail to pay and reflect upon his evil deeds. Committing suicide is an easy way out, a cheap disappointing end to a story with a lot of potentials.

Depestere Nov 26 2011 2:19 am One of the best k-dramas I have watched, the story line though a little over-complicated and bogged down by too many coincidences was beautiful. The characters were also damn cool especially the lead and his friend. There was also some powerhouse acting by the father who has an amazing raw talent when it comes to acting. Kudos to the makers of this show for finding a real nice balance between a thriller and a drama.