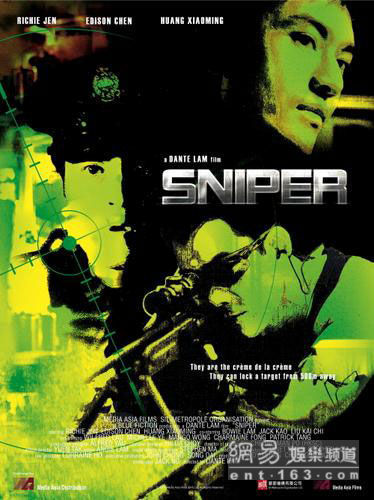 Ming Richie Ren is renowned as the top shooter in the police force. But behind the legend lies a skeleton in the closet: his former teammate and superb marksman CHING Xiaoming Huang, who was jailed for accidentally killing a hostage, has just been released. With only vengeance in his mind, Ching determines to take on Ming and the police, believing they are the real culprits for his fall.

When a high-security prisoner transfer is sabotaged by a mysterious sniper and a major convict has escaped, Ming and his team are dispatched to profile the suspect. O Edison Chen, the hot-headed rookie on the team, surprises everyone by accurately replicating the suspect’s impossible shots. Ming sees the potential in this youngster and decides to take him under his wing. Yet when O becomes fascinated by Ching and determines to top his shooting skills, he might become another wild card on the loose.

Meanwhile, Ching continues his plan with the largest heist ever in the city. Believing that Ming had withheld key evidence that could free him, Ching decides to lure his target in by holding Ming’s daughter as hostage and re-enacting that fateful day. It is the ultimate showdown amongst three expert snipers in the Hong Kong cityscape…

HK Neo Reviews Aug 06 2009 12:50 am All in all, The Sniper is simply a critical failure and a commercial failure. Whatever, Dante Lam’s intention is, it will probably remain unclear. Maybe he turned into his Heat Team (2004) mode, but even that was funny and cool at the same time. Maybe he turned his head back in place, after this and churned out Beast Stalker. Needless to say, the sniper shooting is cool to watch, Richie Ren is cool dude and so is Huang Xiao Ming to a degree and of course, Edison is just plain crap. The main thing is that this is a movie, but it never seems to run like one. Like the failure of mindless action flicks in Hollywood, for example, Ballistic - Ecks vs. Sever. While The Sniper never seem to reach that height of disappointment, but when you are aiming for a target as low as this, the only loser that comes out of this is ultimately the paying public. For the last time, and hopefully will be, the film is a cool and bad, but nothing can be worst than Edison, himself … (Neo 2009)