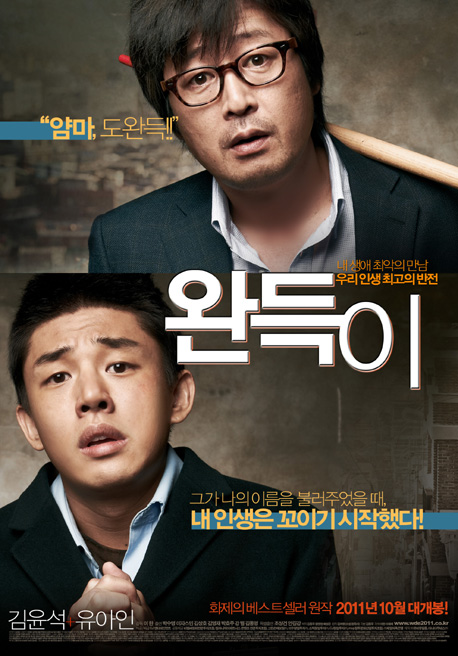 17-year-old Won-Deuk (Yoo Ah-In) is a sophomore in high school with a miserable outlook on life. He doesn't have much interest in school, his diminutive size father has a hunchback and Won-Deuk doesn't know anything about his mother. The one thing that Won-Deuk excels at is fighting. Although he isn't aggressive by nature, If anybody makes a snide comment about his father then Won-Deuk has no problems beating the crap out of them. Making Won-Deuk's life that much more miserable is his homeroom teacher Dong-Joo (Kim Yun-Seok) who seems to frequently pick on him in class. This bothers Won-Deuk enough that he often prays in church for Dong-Joo's sudden death. If Won-Deuk doesn't get enough of his homeroom teacher at school then he often sees him at home. Dong-Joo lives in a rooftop apartment directly adjacent to Won-Deuk's rooftop apartment.

A few days later, Dong-Joo discovers the car belonging to Won-Deuk's father has been vandalized. Dong-Joo knows immediately that the man that lives in the apartment directly in front of the parked car did it. Dong-Joo yells at the man from the street to come out and then demands an apology. Instead of apologizing the neighbor curses at Won-Deuk's father. Before anybody can do anything, Won-Deuk punches the neighbor in the face. They all go to the police station.

At the police station, Dong-Joo stands up for Won-Deuk and attempts to shield him for any type of punishment. The neighbor is still persistant in getting charges filed, but his sister Ho-Jung (Park Hyo-Joo) apologizes for her brother's behavior and brings the matter to a close. Meanwhile, homeroom teacher Dong-Joo becomes attracted to his neighbor's sister. Won-Deuk also begins to view his homeroom teacher in a different light. 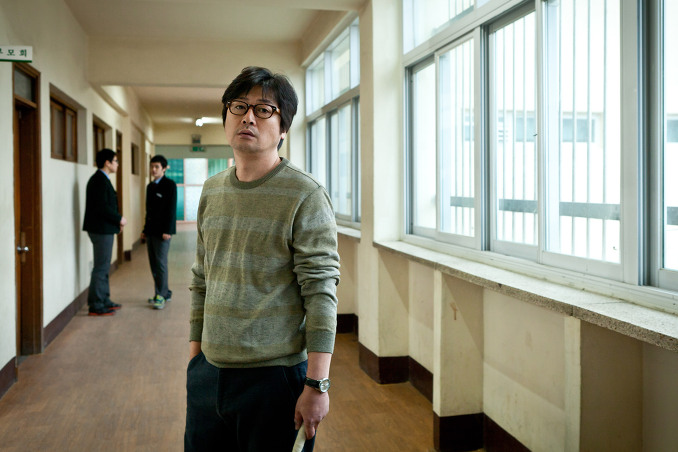 Q&A for "Punch" took place after a screening of the movie at the 2011 Busan International Film Festival on October 10, 2011. Appearing as speaker is the movie's director Lee Han. AsianWiki editor Ki Mun was there and transcribed/translated the session.

Yoo ah in really good on his acting. I have been a fan and will never stop. His the best

Wayer Sep 17 2018 9:58 am This movie is a gem. And true to the director's word as to why it became a hit... So many issues were brought forward in the movie about social and society which is relatable. The movie felt real, and at the same time it has many funny moments. Kim Yunseok is a natural in any of his roles.. and Yoo Ahin will definitely last long in this industry :)

NiceFilm Sep 09 2017 9:01 am I thought this movie was gonna be super melodramatic, based on that poster lol. Despite the dark atmosphere, this movie made me feel good and warm. I loved the awareness on diversity (cultural and disability), you don't get to see much of that in Korean films. Great characters, unique movie.

the_dreamgirl May 30 2017 3:10 am WOOWWW I totally want to watch this movie after watching trailer!! Yoo Ah In love you so much!!!

Racks Oct 24 2016 10:10 am As always, love You Ah In. Eventhough he's much older than what he's portraying in this film, you might still think that he's just 17. Very passionate in every thing that he does. Great film!

chatarina Apr 21 2016 7:51 am as a teacher for age 18-21 (university student), I do understand how difficult controlling the student especially boys. Luckily, Dong-Joo focus to Won-Deuk only..in the real life in teaching, the problem it's bigger than that..we as a teacher has to lead all the student emotions..don't let the student controlling or playing teacher emotion. Kim Yun-Seok really a good actor, he can play the role model as really a teacher...his succeed show how the teacher controlling student emotions. But why at the end of this movie Dong-Joo has to kiss Ho-Jung? it was breaking my heart...

i love hearing Korean's swearing. i love things about family without being so dramatic and cliche words. I love the way love being acted, not told. I just love this movie so much, and realizing that Yoo Ain is sooo charming as a-brutally-cool-classmate/senior, not as a nice-boy-who-love-nuna-brutally (?).

for those whose heart needs hug.

kingbert c. alcanices Feb 03 2014 8:40 pm it's a good movie indeed.One can get lessons from it. That acceptance from what you are and for who you really are make a man wholistic and brave.

CJ Aug 31 2013 10:08 pm I just watched this movie Punch by CJ entertainment on Mnet America (All Asian Cool) on comcast channel 334, and absolutely loved it. Now i would like to buy it. If anyone knows where i could buy it feel free to holla at me @ (quttte77@outlook.com). Thank You!.

Capricorn0Angel Jul 30 2013 11:56 am Just like how 'Ki' reviews other movies, I think there are a lot of potential dialogs and situations in the first half that can be great punch lines if they are developed well until the 2nd half. But they somehow slowly disappeared, not in a blink, but really step by step, but still you can feel that they dissolve.

I really like how this movie captured all perspectives the 2 lead (Dong-Zoo and Wan-deuk) proportionally. And I love how Wandeuk gradually changes, from being really insecure to slowly accepting persons around him to become his friends and beloved ones. It's hard to get people not feeling shocked that you suddenly change. And Yoo Ah In made his best :)

As I'm a teenager and I'm mostly attached to Wandeuk than to DongZoo in this movie, so I can't say anything more about Kim except that he's hillarious :D

ulaspotamus Jun 13 2012 5:18 am kim yun seok ahjussi jjang! daebak! i love every conversation in this movie. so natural and cracks me up! XD

Jennie Kim Dec 09 2011 12:50 am When I saw the trailer I was already hooked to this movie, then I found out they were playing this in my city so a friend and I decided to watch it today.

Let me tell you, this movie did not disappoint me whatsoever! The production crew cast some really great actors and each of them fulfilled their roles quite well! I would love to pick a favorite character but each one of them had their own special charm which added to the film.

If I do had to pick something out though which I didn't enjoy, it might have just been the way they styled Kang Byul who played Yoon-Ha. I don't know, for some reason the hairstyle and her clothing to me aged her a bit and it looked like a noona-dongsaeng relationship instead of a couple who were the same age and same year in high school.

Overall a great movie! If you folks get a chance to see it don't pass this up! It won't disappoint you one bit!

Ki Oct 29 2011 2:08 am Really enjoyed PUNCH - the movie leaves you with a warm, fuzzy feeling & the film also packs a surprising amount of humor. I think the English title PUNCH is slightly misleading. Although there is a kickboxing angle to the movie, that part really plays a secondary (or even tertiary) role in the grand scheme of the film.

At the movie's heart PUNCH is a human drama dealing with a group of residents living in a low income area of Seoul. Main character Won-Deuk has no interest in school, but he can literally kick anybody's ass. Yet, he's generally a nice guy and usually becomes violent when it comes to protecting those around him. His father is a diminutive guy with a noticeable hunchback. His father works as a cabaret performer when he can and other times as a street performer. Won-Deuk has never met his mother, until he learns from his dreaded high school teacher (played by Kim Yun-Seok) that his mother is Filipino, lives not far from him and wants to meet him. Won-Deuk is shocked to say the least and, at first, does not want anything to do with the woman who (may) have abandoned him. This is the crux of the film.

The actor that clearly stands out is Kim Yun-Seok (the pimp from "The Chaser"). His performance was just so ultra smooth and frequently brought out loud laughter from myself and the audience with his foul-mouth, but good-natured temperament. Yoo Ah-In was also pretty good, balancing well comedic parts, melodramatic moments and the kickboxing action scenes. Believe me when I say there's very few people that will not like PUNCH. It's a feel good, coming-of-age film with a lot of heart, laughs & even some action. One small complaint with the film is that you do get the sense that the movie didn't aim as high as it could possibly have. There's enough potential in the film to make you believe that this could have been one of those truly memorable films, but instead you get a pretty good film that just about everybody will like.

@TOK - yes and no. I think there has been some great Korean films this year but they have been indie films - "The Journals of Musan," "Bleak Night," "Pong Ddol," & "Dangerously Excited." All 4 of those made me go "wow!" Check those out if you get the chance. For commercial films most are pretty good, not that many turds and not that many films that blows your mind. I think "War of the Arrows," "Sunny," "The Front Line," "The Client," "Quick," "Silenced," "Detective K," all have their charms. Lastly there's the tweeners that's not quite commercial or indie but really interesting - "Late Autumn," "Poongsan," and " The King of Pigs." Cheers ...

And to the 'Ki' who makes reviews about the latest korean movies......the reviews you gave on recent korean movies...it seems like most of the Korean movies these days...are like....1st half is Great but 2nd half lacking something......yeah..this year..Korean Cinema hasn't made any Great movies so far......last year was Great!...but 2012 would be all about korean movies (The war against crime, the Thieves, Miss Conspirator..etc).....just like Year 2003 (Memories of Murder, a tale of two sisters, old boy, classic).......anyway, hope this movie is good.

Michael Jones Oct 09 2011 4:48 am Doesn't at all seem like a martial arts movie hopefully this movie will add to the trend of Asian cinema where great movies feature excellent martial art scenes but are not necessarily martial arts movies.