The Maid of Dojoji Temple 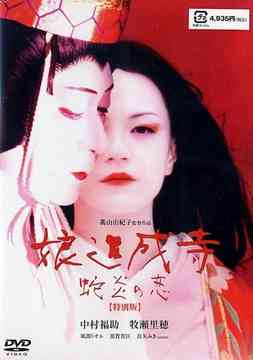 In the morning mist, Shiori stands on the roof of a high-rise building. Dressed in the colourful kimono of the maiden in the Kabuki dance Musumedojoji, she throws herself off the roof. Shiori was the only female disciple accepted by Tomitaro Murakami, the reigning onnagata (actor playing female roles). Seeking an explanation to Shiori's mysterious death, Haruka, Shiori's twin sister and a modern dancer, approaches Tomitaro and sees him dance Musumedojoji with total fascination. She decides to give up her career to become Tomitaro's acolyte. Obsessed with expressing women's lust and passion, Tomitaro shouts fiercely at Haruka during their private lesson. Haruka finds herself gradually drawn toward the Kabuki star, realizing that her sister could have felt the same way and was perhaps loved in return. However, for Hideji, another devout disciple of Tomitaro, Haruka is an unpleasant obstacle to his hidden agenda. In an attempt to keep Haruka's heart away from Tomitaro, Hideji tells Haruka a shocking story about the relationship between Shiori and Tomitaro that involves Hanamaru, who was once Tomitaro's rival onnagata, but has since left Kabuki to become a superstar in commercial theatre. Anguished over her love for Tomitaro, Haruka wonders if both she and Shiori represent mere tools for the dancer to explore womanhood. Meanwhile, Tomitaro, has a deep secret of his own...