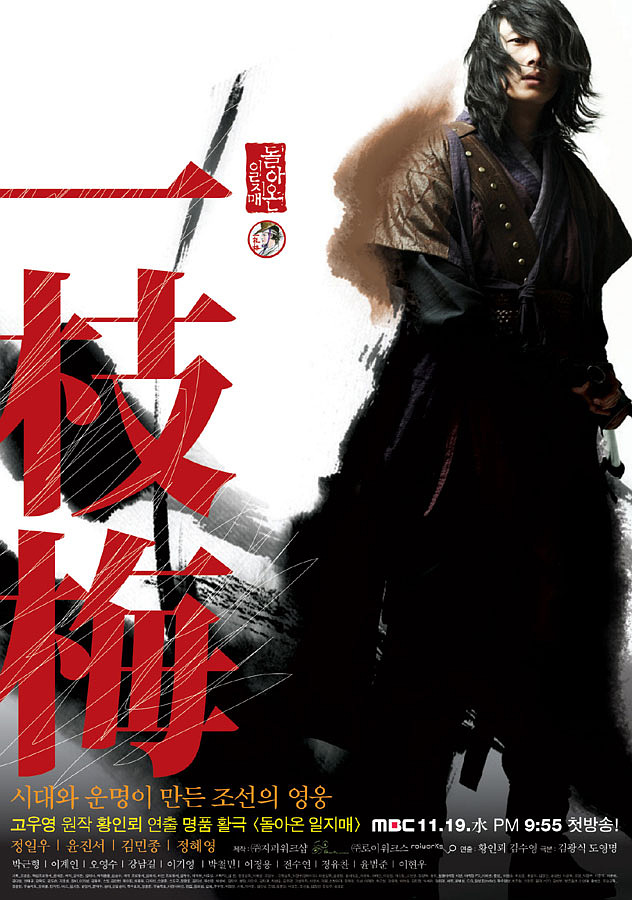 He was born out of wedlock and his father was a high-ranking Champan official while his mother was a lowly servant. To protect the honor of his father’s family, he was abandoned as a baby and tucked underneath an apricot tree. He was given the name Iljimae (A branch of Apricot Tree).

Iljimae was adopted by a family who lived in the Qing Kingdom. After tracing his roots back to Korea, his father rejects him once more.

With a heavy heart, he returns to his country and unleashes his anger upon the ruling class to fight their injustice and tyranny for the sake of the commoners. Wherever he appears to uphold justice, he leaves behind a single branch of an apricot tree...

Wol-hee is the one woman in Iljimae’s life who reconnects him to the world as he lives an isolated existence and hides his face behind a mask to be a hero to the people.

There were a few scenes that brought me to tears!

This drama is a must see, it is just fantastic!!!

Jeanne Jan 17 2019 9:15 am @Mosj They are completely unrelated dramas. They are on different networks, they have different actors, different director, different screenwriters. Just because the drama is based on the same comic strip character doesn't make they related at all.

Lee Seohwa Apr 27 2018 2:14 am Please make Iljimae season 3 please! Korean Drama title: “Iljimae: The SoulHunter” Genre: Manga/Action/Martial Art/Romance (Stories are all fiction about base on real life background, none of events are true!) (I made it up).

Plot: An ordinary young policeman who lives in Korea Seoul, became a disguised superhero named Iljimae when his brother have passed away as Iljimae, he rescue people and protects the world of devastation South Korea. Iljimae The SoulHunter will revenge someone who kills his oldest brother and someone who is about to ruin South Korea with North Korean.

Mosj Apr 27 2017 12:26 pm I have watched this drama 3 times and I still don't understand the connection they make in the drama between the past and present time..when He saves her in the beginning and at the end. I still haven't been able to figure that out. It's got to mean something more than just "the afterlife" right?

both of them have nice story in its own.. Even i annoyed by the narration :D

LKB Feb 03 2017 2:34 am As pseudo-"sequels" go, this is one of the more worthy ones... Sure, it isn't the original which was astounding, but Jung Il Woo in many ways could've been committing a sort of career suicide doing this role when the original Iljimae Phantom Thief AND Lee Joon Gi are SO SO very popular... Like another person, the narration sort of annoyed me--I'd much rather just watch the story progress without someone talking about it in third person--but Jung Il Woo really did well, especially for such a youngster taking such a big role on. The original is one I'll obviously watch more as its cast made it something I reminisce on/want to rewatch often, but this has a particular character I ADORE that only appears here in the extras despite being, to me, one of the major roles: Cha Dol Yi played by Lee Hyun Woo! THAT made this very special... it isn't as refined (the action can't compare and the other is chock full of superstars, even the adorable teeny tiny Kim You Jung who looks EXACTLY the same today, TOO TOO cute), BUT this is more like a personal life story, and in that it supplements the other quite well... plus they made it convincing enough that LJG and JIW are one and the same, a few years apart or simply "another artist's rendering" since LJG playing the same role twice would be odd when he's so successful/in demand. This role, for me, MADE Jung Il Woo someone to watch, and as a result of this show, I looked at his profile and stumbled upon the sweet story 49 Days where I thought, with a name/role so vague as "scheduler," he would be some random clerk/admin who was barely present... but got to enjoy a whole lot of screen time with him instead!

jan Aug 26 2016 12:48 am I'm watching this jung il woo kdrama again as i await for the next episode of cinderella and four knights and still in awe bcoz of the great story, sword and fight scenes and characterization of the actors and actresses specially jung il woo. To think that he was barely 22 y/o when he did this and his acting has already this much depth. His fight scenes were awesome, acting is no doubt remarkable. One can read how he feels thru his eyes and facial expression in each sequence. I only hope that he do something of this kind again in the future. Return of Iljimae is one great kdrama. One of my faves!

johanne Jun 09 2014 8:26 pm Return of Iljimae is also a beautiful drama..if you continue watching it til the end &if you fully understood the whole plot. How could others say it's pointless when they stop watching at the middle. You will never see the beauty of story if you didn't completed watching it. Iljimae in this book has amazing story too, he & his mother finally met when his mom is dying, he sacrificed himself being away from the woman he loves for a total of 10 years just to save the people of Joeson. Other just stopped watching in the middle bcoz they didn't feel the story, felt boring, think it's pointless bcoz they tend to compare its story to Iljame I, but they didn't come to realized how the rest of story goes & how it ends. For me, it worth watching. I've never regret giving 24 hours of my time just to finished this drama. I love Jung II-Woo.

farahnaz 09215793765 Mar 10 2014 9:06 am I starded to watch this drama because the first iljimae was amazing and so I thought this one would be good too but I couldn't even make it to episode 4 watching it was just pointless

liza Jan 09 2014 1:23 am I was watching this drama because of Jung Il Woo, but each episode was so painfully long and boring that I barely got past 5 episodes in total, I had to quit overall.

Jay Christopher Jun 14 2013 1:25 am I love this drama, I live USA and read closed caption, but I am going crazy trying to find the singer or song that's played at the ends of each episode.

It's such a pretty song, beautiful voice too. I am at a lost of how to find this out.

I love this show thank you!!!

CiCi Jul 19 2012 12:44 pm I think Jung Il-Woo is a far better Iljimae in this movie and much more believable especially when doing martial arts. Also, he is so handsome, he is breathtaking and a much more refined actor. I liked this story,scenery and music better as well.

Although Lee Jun-Ki is cute, his Iljimae character was cornball comedy much of the time. Park Si-Hoo saved that film. Good call on whoever cast Si-Hoo and convinced him to do it. I would love to see Jung Il-Woo and Park Si-Hoo team up together in a film like this as I think they really look like they could be brothers.

Hye Ri Dec 30 2011 9:19 am Ok, I watched this and I think it's great but I prefer the other one with the actor Lee Jun Ki, even though the acting wasn't really good but they built a really emotional drama! :D

Kay Jul 01 2009 10:44 pm Well, I already watch both versions, and in my opinion (even if Im #1 Lee jun Ki fan) this version is way better. Its just so beautiful, and the acting is so good, if you see the director way to take the scenery, you can say that its just great. In Lee Jun Ki Iljimae, theres a problem with the script (you never get if you are watching a comedy or a drama), and sometimes the acting is terrible. And by the way the topics are different, just the same caracther, this is an adaptation of the original story (a popular comic), and Jun Ki`s only share the name of the character.

Annie Jan 24 2009 6:58 pm this is such an amazing drama :) jung il woo is fantastic actor and props for the leadingl ady yun jin seo too :) supporting cast is amazing too :D