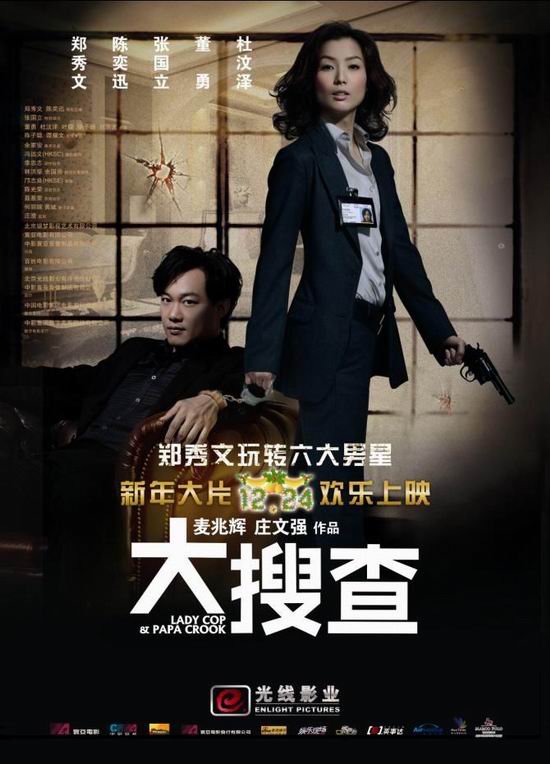 John Fok (Eason Chan) is the kingpin of illegal red oil in Greater China. When an oil tanker explodes accidentally, he becomes the focus of investigation by Hong Kong and Mainland Chinese police and is forced to halt his business to wait things out. While his business rivals start closing in, a member of his household is planning to betray him. On the surface, John seems totally helpless, but in reality, he's been staging a major comeback for months. Just as he is finally ready to turn his fortune around, however, his only son is kidnapped!

Senior Inspector Molline Szeto (Sammi Cheng) is the rising star in the police force, who is well praised for busting crime with her characteristic sangfroid and precision. However, in matters of love, she is totally at wit's end. After dating the same man for more than ten years with no likely prospect of an imminent wedding, she determines to cut the knot once and for all, before she becomes too old for childbirth. Poised at the crossroad of her life, she is thrilled to be assigned to investigate the kidnap of John's son.

John dispatches his whole gang to ferret out his son's whereabouts, only to find out that his rivals are redeploying people in China to assail him. Just when he is about to order an all-out fightback, Molline suddenly arrives with her team to garrison at his house. Spurning her at first, he soon finds her critical analysis of the situation at hand both apt and useful. An unlikely cooperation between cops and crooks thus ensues, leading to conflicts and clashes galore at every step till the very end.

HK Neo Reviews Aug 06 2009 12:59 am All in all, Lady Cop and Papa Crook are boring, uneven, uninteresting and essentially a complete waste of time. It is rare that I can so easily pan a film that stars Sammi Cheng, but this is not a cheap budget movie and it also carries the weight of expectations of seeing the film through the eyes of Infernal Affairs director, Alan Mak. So what can I say about this flick, basically, despite the much welcome back of Sammi Cheng, the film fails because it does not know what genre it belongs and along with the excessive cutting of the film by Mainland Censors, the film is ultimately more uneven than imagined. Still, there some funny moments, the Richie Ren cameo, a likable Sammi Cheng and a somewhat underrated comic display from the much missed Chapman To. In essence and all truthfulness, the film amounts to no better than a high school English essay which wants to cover too much and ends up getting lost at the whole point/purpose of the work. So do I recommend the flick and it is not that hard to say, I don’t think so … (Neo 2009)

Ki Mar 15 2009 1:28 am “Lady Cop & Papa Crook” appears to be a good ole’ fashion Hong Kong cops & triad film. The film is directed by Felix Chong & Siu Fai Mak, stars Sammi Cheng (making her comeback after a 4 year hiatus), and co-stars Chapman To - all of whom had significant roles in the “Infernal Affairs” trilogy that rocked the Hong Kong world several years back. The first five minutes of “Lady Cop & Papa Crook” further leads to this conclusion as you get a soundtrack completely reminiscent of “Infernal Affairs” and a car chase scene to start off the film. The film then quickly devolves into something else, as the main storyline isn’t so much “cops vs. triads” as it is “cops & triads vs. kidnappers” - which is fine by me if the story delivers.

Maureen Szetoh (Sammi Cheung) is a brash female cop that has more problems dealing with her personal life. She’s been stuck in a stale 10 year relationship with her live-in boyfriend who works as a sculptor. Meanwhile, John Fok (Eason Chan) is a triad kingpin involved in smuggling oil between China & Hong Kong. The cops disrupt his latest shipment, which leads to huge financial losses for John Fok. Things quickly turn for the worse when his son is kidnapped and the abductor asks for $80 million dollars. Maureen Szetoh is then assigned to the case and although John Fok is weary of the Hong Kong cops he wants his son back at any price even if it requires co-operating with the cops.

With this set-up there’s a plethora of angles the movie could have taken, but Felix Chong & Siu Fai always chose the safe & bland route. The tension between the cops and triads while they work together to uncover the kidnapper’s identity, works in only the most minimal of ways to bring life to the characters … but only in the most minimal of ways. On the bright side, Sammi Cheung, rules with her charismatic screen presence. She often carried the appearance of a punk rock model dressed in a Wall Street get-up and made that type of persona come alive on screen. Eason Chan is given a far more generic character to play and he seemed intent to play it as generically as possible. There’s also not much to notice with Chapman To’s limited role either (except the excess weight he’s put on since his Infernal Affairs days). Kate Tsui also appears in a limited role and she’s as nondescript as her peers.

Surprisingly, the film also has a noticeable low budget feel & look. The campy elements worked marginally, but is held down by the flat movie script. What “Lady Cop & Papa Crook” has going for it is the charismatic Sammi Leung playing the tough lady cop to a tee. I did have a ball watching her onscreen, but besides her performance there just isn’t anything else about “Lady Cop & Papa Crook” to get excited about. Not surprisingly, the resolution of the film turns out to elicit nothing more than a yawn. The movie would have been a complete train wreck without Sammi Cheung, but as it is, “Lady Cop & Papa Crook” turns out to be a marginal picture that builds interest occasionally, but fails to turn any of it into something more meaningful.