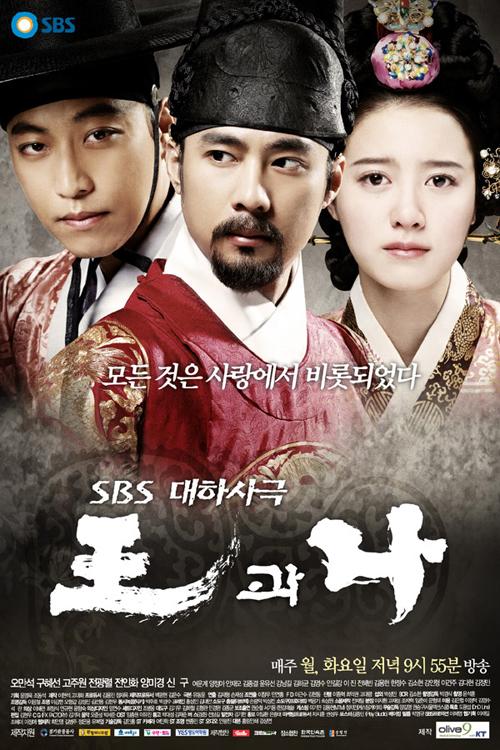 In the Joseon Dynasty period, the kingdom was enveloped in a political maelstrom. Cheo-seon was born as a posthumous child and separated from his mother immediately. He was raised by Weol-hwa and the old Swe-gwi, who ran the eunuch school. When he meets So-hwa, the daughter of a powerful noble, he falls in love with her immediately. He voluntarily becomes a eunuch to be close to So-hwa and is assigned to work for Cho Chi-gyeom, a senior eunuch. Entering the royal palace, he sees King, Sung-Jong and So-hwa spend their first night together. He becomes So-hwa’s loyal protector. As the political battles rage on among the courtesans and wives in the palace, So-hwa is chosen by the king to be his queen and Cheo-seon vows to be her loyal servant. But So-hwa is eventually dethroned as the queen and leaves the palace in disgrace. Cheo-seon helplessly watches these events unfold and he secretly helps So-hwa. But in a cruel twist of fate, he is the one chosen to execute So-hwa’s death sentence by serving her a bowlful of poison. After So-hwa dies, he looks after her son King, Yeonsangun as if he were his own son....

Kris Nov 15 2020 7:33 am The king’s in this drama to not appear to be lustful. Not very monogamist. Basically you have a king, ministers, the palace staff in various roles including eunuchs, the military, the scholars, the nobility, the commoner, the slave, the female entertainer, the outcast exiled, the shamans. The reason he had many women was because of the social contract between the ministers and himself. Those in power need people behind the scenes. It’s also was cause of infertility and infant mortality rates and assassins. It’s why the son wanted nothing to do with it. The way they set it up the king was basically required to marry number x daughter from each clan. The women had no say, their parent’s no say, the prince or king had not much say. Good thing it’s done.

Kris Aug 30 2020 3:05 pm Wish I could find to rewatch. First historical drama series I ever watched. I’m not a huge fan of the historical dramas. There is too much misguided blame with a dose of torture thrown in. There were a few awesome scenes. For instance the scene where they are taking her away and the common folks pay respects to her and she smiles. I liked when the guy sought vengeance for his mom. It was great to see all the roles in the palace from the lowest to the highest. I found the ministers to be worse than the emperor and family. I pitied the eunuchs. Thank goodness they do not do that anymore.

Pryate Aug 06 2017 7:24 pm I dropped the serie at episode 12. I adore historical dramas, but this one is only about castration and testicles. The scenes of violence and humiliation are too complacent. The characters are caricatured.

Ozzie Santagada Jun 02 2017 9:15 am This series is long and terrible. Its value is that it allows to know the life of the eunuchs, that for the westerners is only a thing of the Greco-Roman past. Only eunuchs remain in India. The sacred mode in which kings were treated, as if they were divinities, also impacts the Westerner. In this series the kings appears like they are unuseful to govern anything, less themselves, dedicated to lust and far from the needs of the people. It's more theater than cinema. The bad ones are too bad and the good ones appear like fools.    The male actors are quite good, especially Jeon Kwang Leol and Ahn Kil Kang. The female actresses are regular except Lee Jin who stays in a role that suits her face.    There are too many tears and too much pain in this series. The best part is the beginning, when you see as children the three main actors. The music is boring and the scenes almost always unfold in interiors without taste. The scenes from the final chapters with the crazed king are disgusting. In the end all die. It is a series too long and with the life of court intrigue minutely reported. I would not recommend this series, as I would do with Daebak, Dong Yi, and Horse Doctor, or The Flower in prison. Sorry.

Shinubi Wang Apr 29 2016 3:22 pm Bad casting! Bad! Bad! Going into episode 9 and they are all grown ups, well into their late teens but we have over aged actors playing these characters - Oh Man-Seok, Ku Hye-Sun and Ko Joo-Won. Worst was Man-Seok, then aged 32, playing a late teen Cheo-Sun. The other two were in their 20s.

Are they really short of teenage or early 20s actors? I don't think so, just lazy production directors.

Shinubi Wang Apr 29 2016 5:42 am Just getting into episode 2 and I am getting pissed off already. They cast a 42 year old (then) Jeon In-Hwa to play Crown Princess Insoo who was 20 years old when her husband, Crown Prince Uigyeong, died in 1457.

18 year old Yejong, when he became king in 1468, looked as fit as a fiddle when he was supposed to be too physically ill to govern (he died about a year into his kingship). WTF!

While this was supposed to be a fusion saguek, at least get some facts correct to be consistent with the plot.

Teling Aug 25 2015 10:01 pm I finally finished the whole chapter of this drama. A lot of sad scenes that left me crying. The strong will to live and take avenge of hatred for the woman one loves, but even a stronger will to protect the woman he loves and the one who loves him back. In the end the true love will always win over one sighted love.

richard sibanda Aug 11 2015 6:20 am to me the chapter of ulwoodong is very sad when ever I see that chapter I cry

SHALEN Nov 09 2014 10:21 pm for me this movie made me cry for almost a week!!i just can't stop my tears whenever i remember the sufferings of the character!!!love the cast of king and i!!!!

Jo Ongsioco May 06 2014 1:21 pm I have seen up to episodes 452 only. I need to finish the epic. where I cud find the remaining episodes. This is the drama I've learned about the life of the eunuch. Very interesting. Good job for all the performers.Thank you

katya Dec 18 2013 11:16 am I liked this drama, especially characters of eunuchs. Though I failed to understand how Kim Cheo-Sun character could achieve the greatest feat in the history of eunuchs. What made me watch this show until the end is actually his foster father, Jeong Gwang Ryul and his loyal bodyguard. Great performance.

vone Jul 31 2013 9:30 am i hate the character of yoon so-wha i'm not sure if i'll continue watching this drama, she's so stupid didn't she know that? the writer makes her role so unbelievable. i'm starting to hate her instead of liking and pitying her. she used to be a straightforward fighting young agassi but now she's a totally absurd person.