You Dance With The Summer 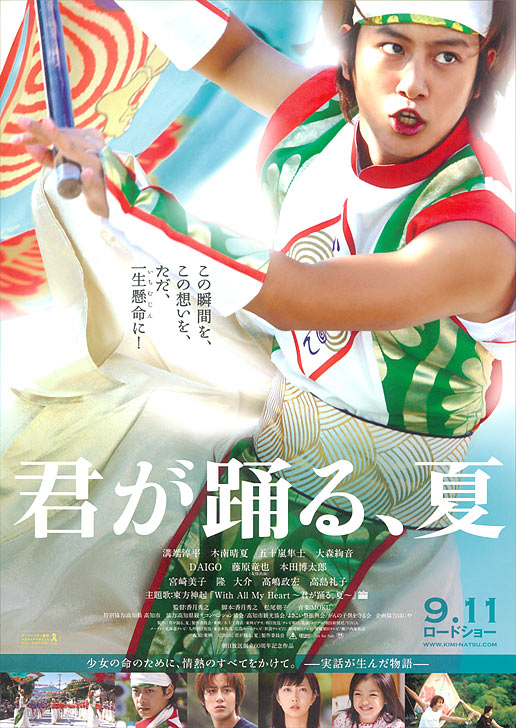 Five years ago Shinpei (Junpei Mizobata) was a flag carrier for the Ichimujin team at the Yosakoi festival in Kochi, Japan. Shinpei now lives in Tokyo and aims to become a cameraman, while working as an assistant cameraman to Shiro Takaki (Tatsuya Fujiwara). Although he is busy with his work he is also losing confidence in himself. Then one day, he hears that his mother has been hospitalized and returns to Kochi for the first time in five years.

While at the hospital Shinpei meets young Sakura Nogami (Ayane Omori ), who is the younger sister of his ex-girlfriend from high school Kaori Nogami (Haruka Kinami ). Back then, Shinpei made a promise to Sakura that they would one day dance together in the Yosakoi festival. Sakura now lives with a terminal disease which no one has lived with for more than 5 years. This might be her last summer.

Sakura begs her father and sister Kaori to dance at the Yosakoi festival no matter what happens. Sakura still remembers the promise that Shinpei made to her and that promise also gives her the drive to live longer. Kaori, knowing how much that promise means to Sakura, tells Shinpei of her wishes. He becomes embarrassed at first, but remembers fondly of their time together. Shinpei then decides to dance once more at the upcoming Yosakoi festival & thus gathers the ex-members of his dance team to practice.

Right when the festival is around the corner, Shinpei's senior assistant Tomoya Ishiguro (Daigo) from Tokyo informs him that he won a prestigious award. The award is a virtual gateway to becoming a cameraman. Tomoya applied on behalf of Shinpei without Shinpei's knowledge. Shinpei also learns that the award ceremony takes place the same day as the Yosakoi festival. Furthermore, Shinpei can't win the award if he is absent from the ceremony. Shinpei must now pick between his dream and his promise ...

Shin Mar 13 2013 10:23 am watching this movie will always make my heart beats and my eyes cry. I envy the crowd and how easy they get the costumes...T^T Yosakoi is the best! >o<

Anyway, truly, the movie has once more showcased the Nihon-jin's prowess in creating great movies! TWO THUMBS UP!

Edmon l. Bermudo Apr 29 2012 2:23 am First time to watch japanese movie like this and is so different! Amazing story! Love the movie

Hilbert Jul 22 2011 7:47 pm Very touching!so far my favorite film ever watched!Congrats to all the crew!

blubble08 Mar 26 2011 9:24 pm How can they make something so normal, like festival dancing, look so amazing in the trailers!! I praise the director and the film editors! Can't wait to watch XD DBSK is a very nice touch ^___^