Love That Makes You Cry 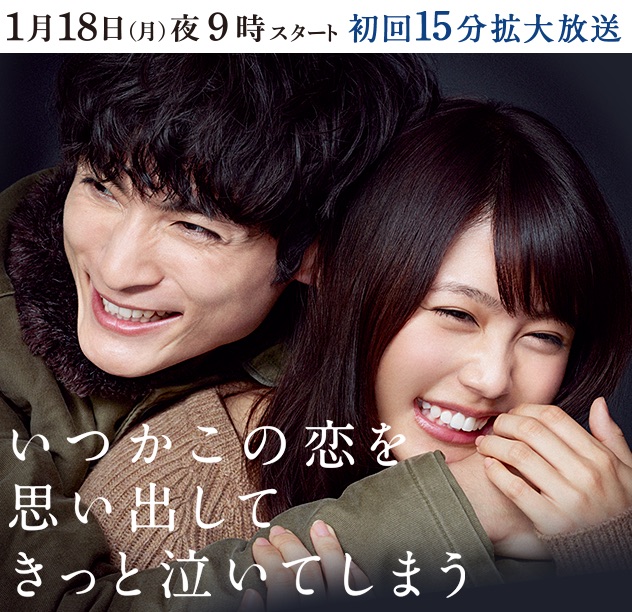 Story depicts the dreams, friendship and love of young people who move to Tokyo, but struggle to live there.

Ren Soda (Kengo Kora) was raised by his grandfather in Fukushima. Hoping that someday he will be able to buyback his grandfather's land and they can work together, he moves to Tokyo and works hard at a moving service.

One morning, Ren finds a letter, which seems important, among his friend's stuff. His friend mentions that he stole it in Hokkaido. Ren is unable to ignore the letter, so he drives to Hokkaido to give the letter to the rightful owner. The owner of the letter is Oto Sugihara. Ren is aware she is being pushed to marry an older man and feels sorry for her. He gives her a ride to Tokyo.

lovely drama Sep 28 2019 7:38 pm I love this dorama I was searching the theme song and I found her thanks

viscabarkah May 17 2018 1:05 pm Love this jdrama, i just watched 2 episodes, and i can not wait for the next episode! Like the title, this jdrama makes me touched. Hahaha: 'D

Pretty Lai Apr 22 2018 8:06 am I love this one so so much. I felt the plot is so real in real life. True love makes so many sacrifices for the one it loves. I'm glad with the ending although I wished there was more.

Lullaby Aug 13 2016 12:12 am Can't believe it's scripted by the same person who scripted Soredemo, Ikite Yuku and Mother. The quality is just so different. The story's just meh, character development's mediocre, and overall, the show's nothing special. My expectation maybe is just too high. But this one is just a disappointment for me.

Vine Aug 12 2016 9:32 am Cant stop crying while watching this drama. I really cried a lot. T_T This is so great. I really liked it. Anyone knows the ost of this drama? Its so beautiful but i cant find it. Anyone? Help me please.

JP May 31 2016 12:24 pm Please someone know the ost or the soundtrack of this drama. It so sweet and i been google-ing it all over the internet and i cant find any.Please someone???

bluelysia May 01 2016 12:29 pm Omg I need more Itsu Koi just to see more cute moments between Ren and Oto.. I love this drama too much T.T my heart becomes warm and fuzzy and its story deeply touch my heart.. Oto and ren chemistry is so good as well T.T

Kujo Apr 30 2016 11:22 pm ah and one more i forgot to mention it, the soundtrack is very very beautiful. i feel almost in all story because of the soundtrack, so enjoy the drama!

Kujo Apr 30 2016 11:19 pm at first i'm so hyped with this drama but the ending was somehow very bad. the plot, the character, the main problem was so good, but the ending was veeery unsatisfied. Maybe because i'm too overexcited too see how this story ends. I give 8/10 for this, very good j-drama with so much lesson about life, especially about work. but dont expect a very good ending in the end. After all Kasumi Arimura was very good actress in this character. i dont know, maybe nobody cant play as good as her ehehe

Dont Apr 15 2016 8:40 am At first i liked it.. But then there's too much coincidence. And then When suddenly Konatsu blabbered things.. It's just non sense. She wasn't supposed to know and care that much. she doesn't even look that close to Oto and yet.."

naisu Feb 12 2016 9:21 am such a good romance and slice of life drama. am loving all the characters especially Asahi <3 i hope everyone will find their happiness in the end ;')

kudos Jan 31 2016 10:23 pm nvm, take back comment, first episode was only good when she was mistreated by uncle. the leads being cutsy and nice and all that bull, kora and arimura make annoyin couple. story only good if they never meet up.

kudos Jan 31 2016 10:02 pm first episode was really good, except at the very end with the appearance of ichimura, cant stand aoi morikawa.

Sora Jan 28 2016 9:44 am Less than 1 minute, I already fall for this drama because of the beautiful opening. It's not a light romantic story, the story also taught about family, life, dreams and struggles between the characters. From masterpiece writer Sakamoto Yuji (remember 'Soredemo Ikite Yuku'?) Prepare some tissue while watching it :)