My Dog, My Happiness (Inu wo Kau to Iu Koto)

(Redirected from Inu wo Kau to Iu Koto) 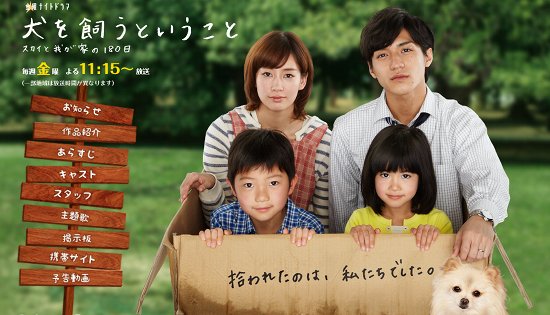 Yuji Hongo (Ryo Nishikido) has a wife and two kids. The family lives near the Tokyo Sky Tree tower. He once dreamed of becoming a musician in his college days, but eventually settled into a job as the manager of a human resource department for a mid-sized manufacturing company. His job is to tell other employees that they have been laid off. It is now Yuji Hongo turns to become informed he has been laid off.

Meanwhile, his wife Sachiko (Asami Mizukawa), who had taken the opportunity of her first pregnancy to marry Yuji Hongo, struggles under the load of working several part-time jobs to try to support their family of four. As their family seems to be fraying at the edges, their daughter Mako, one day, brings home a small puppy they name "Sky Tree." The dog helps to brings the family together once again ...

Arthur Sep 30 2012 10:29 am Very great dorama ! Every time I see Sky tree tower. I keep thinking about this dorama. Ryo and Asami are best couple !

Anyways, I hope the doggy doesn't die at the end after it has brought the family together. That would be a major bummer.