Happy Together: All About My Dog

(Redirected from Inu to Anata no Monogatari: Inu no Eiga) 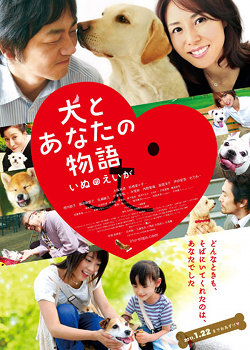 Translator Ichiro Tadano (Nao Omori) decides not to have a dog. when he was young, he cared for a dog named Saba as if the dog was his younger brother, but the dog was killed in a car accident. His wife Masato (Nanako Matsushima) brings home a Labrador dog named Lucky to their new mansion to raise. Ichiro opposes the idea, but Masato insists they have the dog.

Lucky is a very smart dog. Lucky does not respond, unless people call his name. In the afternoons, Lucky stays with Ichiro after Masato goes out for work. Ichiro begins to open his mind to Lucky and eventually has a warm and strong relationship with Lucky, but then Ichiro gets sick. Because of Ichiro's illness the couple experiences hard times. Lucky is the one to save them.

An actor Akira Nakao (Akira Nakao) with an unhappy face is drinking coffee in a scenic open cafe. He acts like he is in a movie. Two waitress (Haruna Kondo, Haruka Minowa) are excited watching him, saying its better than TV. At that time, a woman's voice saying "Akira" echoes throughout the cafe.

The voice comes from a female customer sitting in the next table. The woman is upset at her dog Akira, because Akira does not listen to her. That brings unexpecting disaster to the actor Akira Nakao.

A reporter covers dog-lovers all over Japan for the popular TV program "Visits to Dog Lovers". Today's guest is Sudo (Mariko Shinoda), who owns a smart dog. Sudo insists her dog Billy memorizes words and objects. Sudo is pointing at a panel of flower pictures and ask Billy "which one is a tulip?" At that time, Sudo does do something to make people surprised not Billy.

The reporter completes the awkward situation with a smile and goes to another mansion to cover another story. That person is Nashida (Keiko Horiuchi) who is obsessed with food for her dog. In the mansion, 4 chefs cook for her dog Catherine, but Catherine doesn't eat the food. It seems Catherine does not like the food. The chefs are bitterly disappointed and go back to the kitchen. The reporter asks Nashida what she will do with the dog food. Nashida says something that does not make sense.

The next dog lover the reporter covers is Miura (Katsuhisa Namase). Miura is obsessed about about his dog named John's picture. When the reporter looks at the picture she feels embarrassed. The dog in the picture is wrapped in bandage and plaster all over its body. The final episode of program includes the show's best guest Suzuki (Tomoaki Ogura) who likes walking with his pet.

A kidnapping case occurs. Shinichi Yanagita (Shingo Tsurumi) and his wife Michiko (Naho Toda) gives a photo to Detective Watanbe Seiyo Uchino) and his subordinates. In the picture there is a young girl holding a dog. At that time they receive a threatening call from a kidnapper. Under the urgent situation, the girl in the picture shows up. The dog in the picture is kidnapped not the girl.

Detective Watanabe's subordinates are about to leave, but Watanabe scolds them and decides to catch the kidnapper. Meanwhile at the kidnapper's place, the kidnapper is fascinated with the hostage. Two dog-lovers get involved and the case goes into a different direction.

When Natsuko (Kie Kitano) sees a dog in the park she can't stop crying. Last autumn, her dog Vanilla died. The dog in the park reminds Natsuko of Vanilla. Everyone says she should forget Vanilla but she can't. Natsuko then asks the dog owner to take a walk together and because of words imparted by the dog owner Natsuko can smile again.