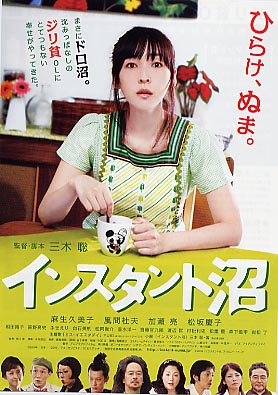 After being forced to resign from her publishing company job when her magazine goes out of circulation, office worker Haname Jinchoge (Kumiko Aso) is given the name of her real father-Noburo Jinchoge when her mother (Keiko Matsuzaka) falls into a coma after nearly drowning in a pond while searching for kappa. Unsure if Noburo (Morio Kazama) is her father, Haname decides to visit him but tells him that she is a distant relative, he happens to be the shopkeeper at an odd antiquities shop called Light Bulb Co., working for her father is a punk rocker named Gas (Ryo Kase).

Haname becomes fascinated with the various oddities and charm of Light Bulb Co., and discovers that she, like her father has a knack for selling things so she decides to become a shopkeeper herself. Customers are hard to come by, but she listens to her dad's strange advice-like filling a sink full of water whilst running errands makes life exciting. One day her father offers to sell her the key to the family warehouse for 1 million yen to fund his next trip, which she excitedly agrees to without thinking. However, when she discovers a shocking fact about Light Bulb Co. she chucks the key away in disgust. Later she realizes that she's been stubborn not telling Noburo he was her dad, but by the time she runs back to meet him he's already gone. Eventually Haname with the support of gas....