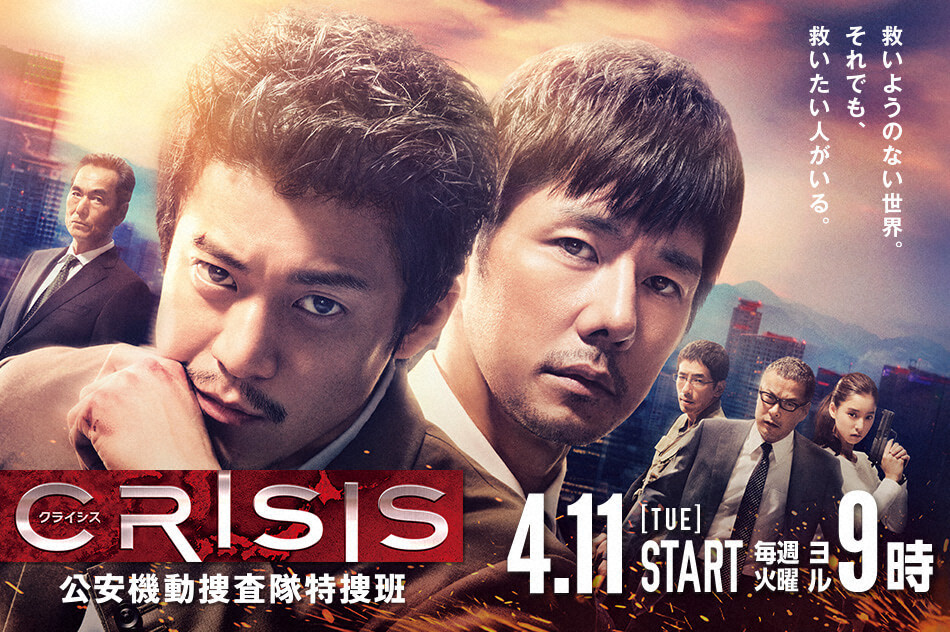 Sanzo Dec 12 2020 11:30 am Finished the series at last. The first few episodes were standard police/secret agent stuff. Mid-day got interesting as it got darker. Wished it was a 12 episode series so they could've fleshed out the supporting characters better and have given better conclusions to both the Inami and Tamaru's story arcs.

[SPOILER] I don't think there needs to be a follow up or sequel as the ending should've been clear to anyone really paying attention. Everyone, except Yoshinaga (the squad leader), is implied to have gone rogue just like the various former agents they've encountered during the series.

Kashii is building a bomb targeting the Metropolitan Police. Oyama is back in touch with her old hacker buddies and would have LOTS of secrets to leak online. Yoshinaga is getting a promotion but isn't happy about it. Tamaru is implied to have sold out to the Chinese. Inami has lost interest in his budding relationship with Kaoru, the lady at the bar. Remembering what Tamaru said about having a "light" to guide you back to the real world, Inami just lost his.

Finally, a sudden news flash implies two things: Kaji has lost a valuable asset to respond to sensitive threats against the government and whatever it was, it's implied that the old Special Security Squad might be involved. It's a dark ending, but it's fitting to the tone and theme of the series.

richard winegard Dec 06 2020 8:26 pm I thought this program was one of the best on the net. The acting was sufficient that the subtitles were almost innecessary. I regret great that there will be no season 2.

Erisu Nov 20 2020 9:34 am This drama series is so cool. The plot, storyline, the actions choreography and actors are all so professionally done. It reminds me of Mission Impossible albeit in a Japanese setting & tv drama.I really hope there’s a season 2,3,4,5.....!!!

Karin Jul 19 2020 7:24 am There is something missing in this drama. Not the acting skill of the actor and actresses. Plot? Standart. Not bad. Editing? Tnis is good enough for me. But i really dont know what is missing in tjis drama

Maria Jun 28 2020 1:20 am A big fan of Shun Oguri since from the Borders and thorough enjoyed his Crisis series. Hoping there will be more of Borders and Crisis. Pls consider having more season. The casts played well and very professional!!!

Matt May 31 2020 3:36 pm Amazing series, please make season 2... I want to see them destroy that dirty nasty and full of liars government!

Gimena Sep 03 2019 9:46 am Amazing drama, he was the perfect cast, Ouguri Shun did an excellent job. I hope they do a season 2, there is still time, but it deserves to continue.

Peter May 19 2018 1:59 am Really enjoying this series. Please have season 2. The cast is really suited to their roles.

Cherrie Apr 27 2018 3:14 am Excellent series, will definitely re-watch! Season 2 with the same actors will certainly be a treat. Stumbled on it because of Shun Oguri (from “Ouroboros”)

vebian02 Apr 02 2018 4:10 am Hope there will be season 2. Even some best Japan dorama do not have season 2 for some of them. Just please like Code Blue, they continuing the season till have the movie this July.

Andmonke Mar 31 2018 5:32 pm I think there no season 2 that's japan style that's will no season 2 to they drama they always do that like before oguri shun drama Border No season 2 too that's even that's good or best the drama still they japan style

Filipina Dec 07 2017 12:55 am I just knew that the singer who sang the opening and ending theme song of this drama is a Filipina - Beverly. She's said to have impressed Oguri Shun in one of her live performances. Can't believe it! As a Filipina, I'm so proud! (tho as a fan of Oguri Shun, I'm beyond jealous T_T)

Yu chan Nov 29 2017 7:29 am Who cried a lot on this one? Hahaha I think I cried on episodes when someone die and everyone get disappointed. ?

FromPHwithlove Nov 05 2017 11:36 pm I absolutely love this drama!! I love Oguri Shun with all my being and I loved him even more when he's got partnered with Hidetoshi. I love them both. The fighting scenes are WOW I almost cried! I love it! I love it! For crime and detective genre lovers out there, this is a must-watch!

KURO Sep 01 2017 5:28 pm Those f*cked high politicians of f*cked government originally creates a special police squad to saves their ass and eliminates the threat from the 'monsters' without realizing they just creates another 'monsters' within in their safe-house. It's a Karma. You reap what you sow. Really hope they could just killed those high ranking in government without the death of innocent souls. Season 2 & 3 please!!!!!!

Mirtika Jul 12 2017 8:15 pm The show was excellent--and the actors worked very well together. The two leads have charisma and acting chops.

The story is dark. Don't expect wonderful happy tied together endings. There is injustice. The theme of government being corrupt and what do people do to work against it fills the show and you can't make that a gleeful thing.

The ending works, if open-ended. It's one of the consequences of gov't injustice, betrayal and corruption--you push good people to make a choice.

sylvia May 25 2017 7:11 am Really love the show have been watching while in Japan would love it with English subtitles and DVD so can continue watching in Australia

Anyways this drama is great! Thrilling and mysterious with some humor.

edo Apr 01 2017 11:04 pm after S:The Last Policeman, i was wondering if they'd make another drama based on the actual anti terrorist units.. been waiting for some time, hopefully it's equally great

Murasaki-kun Jan 13 2017 10:51 pm Yasss! New drama from Shun Oguri. But lately he's been in too many detective drama/movie. I hope he will get another rom-com drama in the future. Btw, good luck for your new drama! ;D