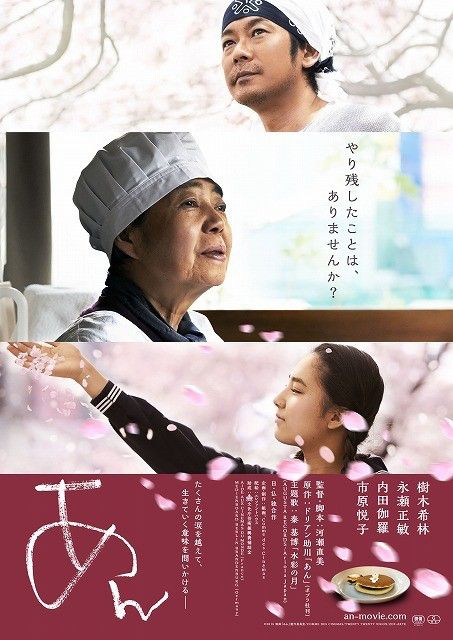 Sentarou was released from prison. He eventually became the manager of a dorayaki bakery store. An older woman, Tokue (Kirin Kiki), is hired to work the Dorayaki store. She makes the sweet red bean paste that fills the dorayaki. Her sweet red beans become popular and the store flourishes, but a rumor spreads that Tokue once had leprosy.

Miharu Bee Oct 16 2022 7:45 am Light and heartwarming. Unfortunately for a film with a duration of almost two hours, the story is not as detailed as in the novel

Lucy Jan 22 2018 12:04 am Quite inspirational and touching. A beautiful film from Japan which led me to other gems (Korean, Japanese, & Chinese) which are hard to find (amidst the rubble spewed forth by Americans). @Gouchi, thank you for pointing me toward the music.

Ruth Nadelhaft Jun 02 2017 12:07 am This is a lovely film which we recommended to friends; it's touching without being overly sentimental.

Daffa Rizqullah Jun 01 2017 9:30 pm Can anyone tell me about what song they played in the ending of the movie?

Mister Loser Oct 28 2016 2:30 am I got this movie from iTunes. This is a very good movie! Although sad, it is somehow uplifting.