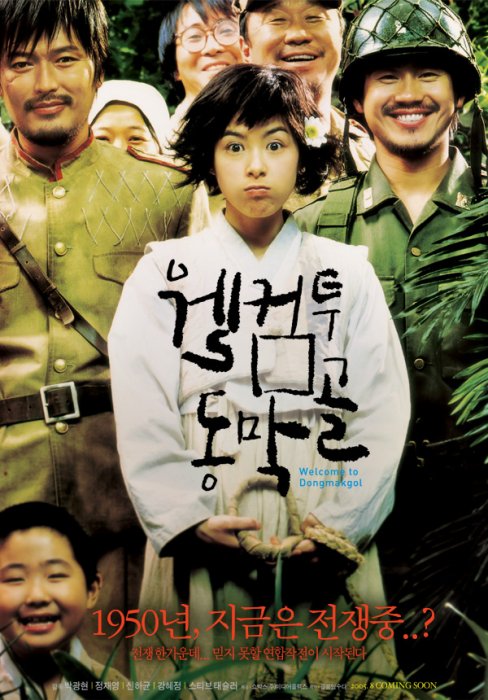 Dongmakgol is a village tucked away on a remote mountain and untouched by the ongoing Korean War. Fate brings three fighting forces together in Dongmakgol: a U.S. fighter pilot whose plane crashed in the mountains, three retreating North Korean soldiers and two South Korean soldiers who are lost. When the North and South Korean soldiers first face off in Dongmakgol they raise their arms, but the charming villagers soon have the soldiers agreeing to a temporary truce. After a grenade destroys the food storage, the soldiers decide to stay and help the local farmers. Meanwhile, U.S. commanders believe there is a major North Korean military presence in the area where their plane went missing and plan a devastating air strike. In order to spare the village from complete destruction, the soldiers decide to work together to divert the attack, possibly placing themselves directly in harm's way. Petra Apr 18 2020 12:11 pm Definitely one of the best anti-war movies that I`ve seen. And I`ve seen quite a few russian war movies, which are the best in this jenre. True, innocent, bitter and joyful, passionate and sorrowful. Couldn`t love it more!

Looking for something old but gold? Watch this :'))

Joonhyuk May 18 2018 12:41 pm This will always top the list of my favorite Jaeyoung movies as it introduced me to him.

Ario Aug 10 2016 12:09 pm Worth it. Friendship,loyalty,comedy yet very touching and emotional. Full of meaning and values

MotorradHermes Jun 27 2016 11:56 am Simply Amazing! Enjoyed every minute of it. One of those underrated and overlooked hidden gems.

CICI Jul 15 2013 10:36 pm Welcome To Dongmakgol is incredible. It really stirs up all of your emotions and had me wanting it to be longer. I highly recommend watching it. Great acting, great filming, great music score ..GREAT MOVIE! This needs more promo, it's too good to be overlooked.

Tejaswi Naik Sep 12 2012 1:43 pm its the movie which hooked me on2 Korean Movies... the movie delves on the simplicity of basic human emotions vis a vis the artficial ideological world we create around us...when faced with circumstances how these fake walls crumble and the bare essential human spirit emerges, is the crux of the movie according to me..be it the Grenade moment, or the wildboar one or even the odd but meaningful standoff the two main protagonists have while answerin nature's call...its a step by step dissection of false facades leading to the raw innocent interior which every human being possesses.... for me, it rates among the top movies i hv ever seen.. but for a bit of overindulgence in graphics, WTD would hv been a flawless movie..

bowei Apr 08 2011 11:14 pm A really good movie. not as good as 71 into the fire or Taeguk gi but its still good. like asian movies or should i say the good ones. u can't stop watching it. Theres really funny comedy slow mo parts. the akwardness between the north and south koreans is extremely funny. but there is still the realism of the war in it. there are some details that just don't seem right and how they all of a sudden got into their ending situation/ how they talk to the white guy and how they downplay .......well they downplay (spoiler) spoler spoiler spoiler spoiler --the death of________ into seeming like it was nothing or not too big when it shouldve been omg. 8 out of 10 then. its a watch :D