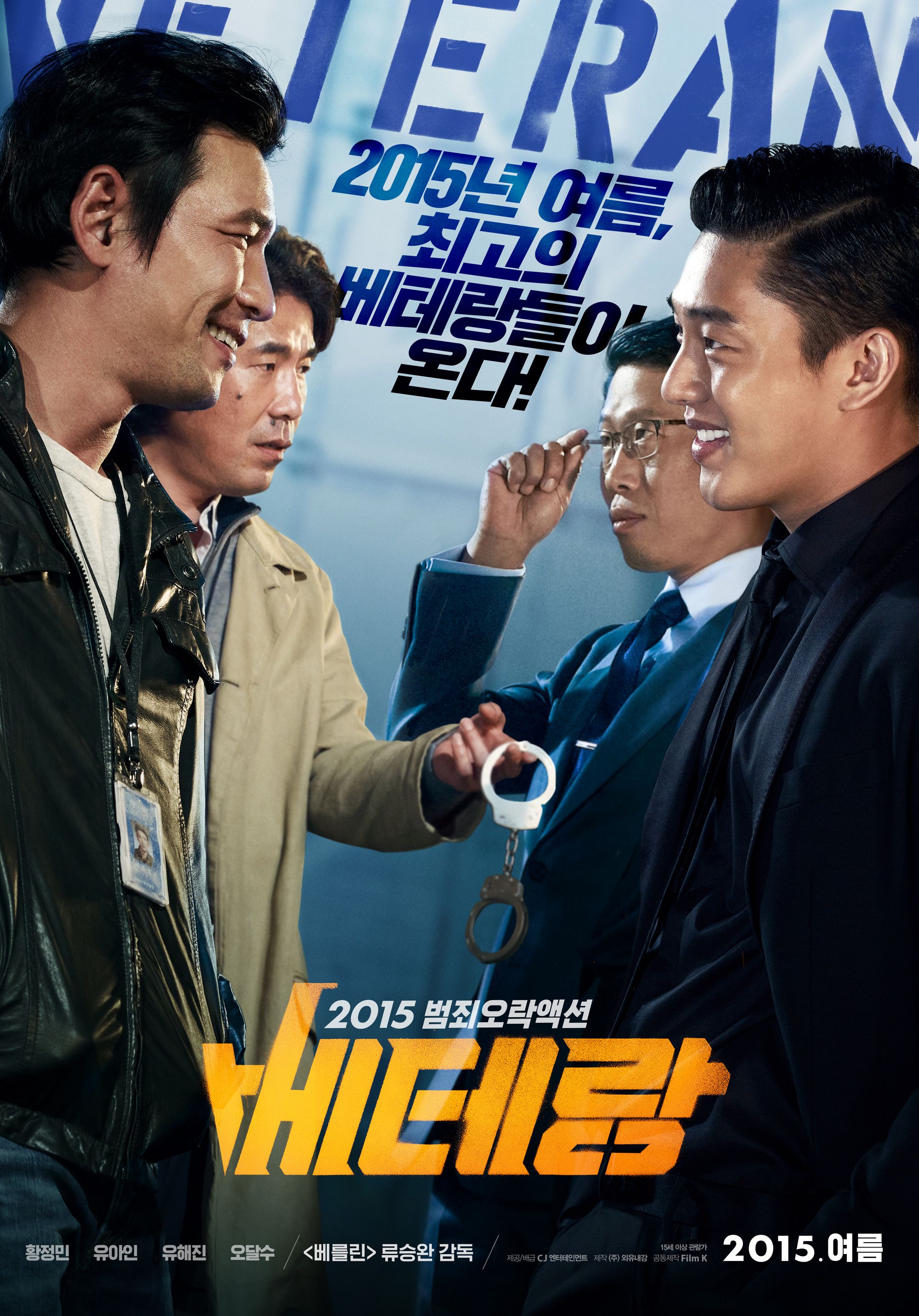 A detective (Hwang Jung-Min) pursues a man born from a wealthy family who runs a large conglomeration. LKB Nov 04 2017 10:03 am You guys completely left out the little boy who played Bae's son (and witnessed the assault)-Kim Jae Hyeon (Hyun if you don't romanize it).

Anyway, fun movie... Not quite the epic story of Bad Guys and such, a little typical overall on the writing, BUT great acinh and fast scenes-stuntmen had to be exhausted! Hwang Jung Min and Yoo Ah In were great together and seemed to love shooting it even if their roles were a touch over the top. It gets about an 8.5/10 from me, pretty high for a film as I am pickier with them...

I4sun Nov 16 2016 3:37 pm This is a must watch movie. You'll hate the villain so much that eventually you become impressed with him.

Jungle_fish Aug 07 2016 8:29 am The casts are really amazing, they are all huge actors that have been starring in so many movies, I think the movie titled veteran cause the casts also all the veteran actors. Yeah bit dissappointed in last scene when jo tae oh beat det seo do scheol, eventhough he didnt fight back why the people around just staring and recording it, they should at least help the det.

Sheng Jul 25 2016 1:30 am This movie bothered me so much because of its interesting plot. It was almost the same with the Korean drama - Remember.

beng Jun 11 2016 11:25 am I just watched the movie in RED by HBO a cable TV channel; my comment on movie's final scene below. I still like him as Crazy Horse in Sungkyunkwan Scandal  :)

beng Jun 11 2016 11:19 am final fight scene too violent and unrealistic for police officer not to fight yoo ah in who is brutally beating him just because there were CCTVs in the area

Hana Apr 27 2016 12:16 pm 2:30 in the morning and still awake watching this film..the acting is superb and the storyline is amazing! Hwang Jung Min is so funny.. If it's in real life, it's scary to know that some people can do whatever they want just because they have money and it's scarier if some people stay still just to have money l..but anyways thanks to that ending JUSTICE PREVAILS!!!daebak..looking for more Hwang ajusshi films!!

Erratic Mar 18 2016 3:08 am Ok, so I saw Sado last night, and this one today. Perfect preparation for his role in Six Flying Dragons. He's diabolical in this movie. O.O

jazzy Mar 10 2016 12:05 pm wow this movie is great i tell you . the action and comedy was really good . a well produced movie i must say . no wonder ' Veteran ' is doing really great in korea with 13 million admissions and is currently the 3rd all-time highest grossing film in Korean cinema history .

gaynigar Nov 26 2015 6:47 am I watched the movie a while ago, and I must say that I really enjoyed it. The movie was dark, but yet had some funny scenes in it, the plot was well written, but the only thing I didn't like was Jo Tae-Oh's character, he should've been a more serious it character; it would have fit him more, instead of the almost man-child like guy we saw. But all-in-all; the movie was great!

karmun Sep 29 2015 8:09 pm Just saw this movie. Great movie. Shows you how corruption is fueled by power and money. Actors were amazing in each role. Funny scenes here and there but also some pretty intense ones. If you don't like intense violence/brutality/abuse, this probably isn't the movie for you.

peco Sep 26 2015 1:36 am Just saw this movie today. I have to say I really enjoyed this flick. All the actors brought their "A" game especially the two leads. I continue to be impressed with Hwang Jung-min. The man can do anything. Action. Drama. Comedy. Even variety. He brings wit and charm to the characters he plays. However, the breakout performance here is Yoo Ah-in. Watching his previous work, you can tell that he has more to offer than what he's been given to play. This is the first time I've seen him play a truly dark character and man does he crushes it. I hope this will give him new opportunities to play different characters and tell more interesting stories.

filmbeats Sep 20 2015 6:32 pm Pretty good popcorn flick. Good action sequences like the fight in the car garage and that car chase towards the end. There are also many humorous moments. The story gives enough character development so you can hate the bad guy and root for the good guy.

camry Sep 05 2015 2:21 am Wow.. Hwang is having a blast.. After making a blockbuster hit ODE TO MY FATHER. still haven't seen it. Congratulations to all the casts. Man Oh mahn.. Can't wait to watch this movie