Tune in for Love 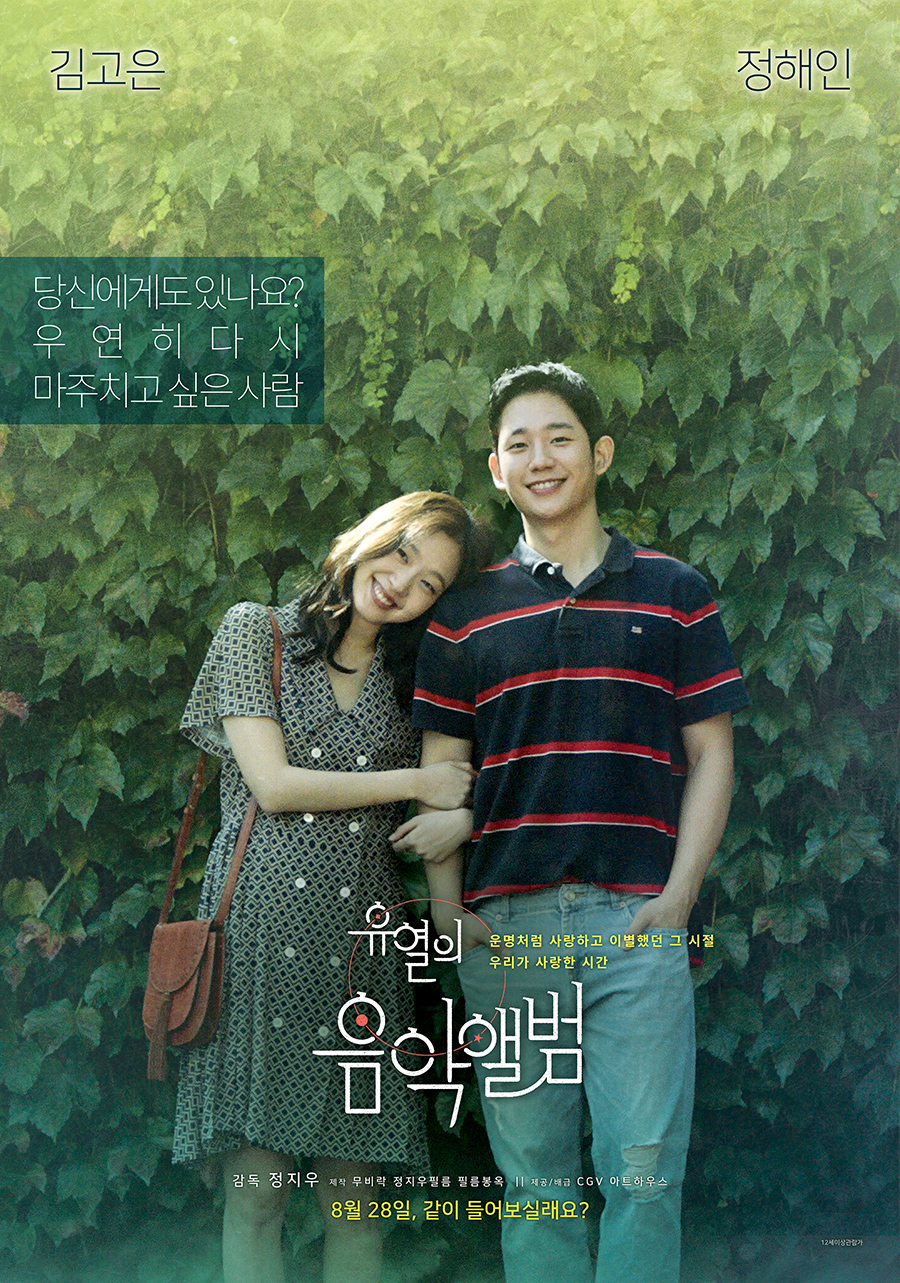 In 1994, on the first day when singer Yoo Yeol becomes the DJ for radio program "Music Album," Mi-Soo (Kim Go-Eun) meets Hyun-Woo (Jung Hae-In). Hyun-Woo is just released from a juvenile detention center and he enters the bakery store that is run by Mi-Soo and her older sister Eun-Ja (Kim Guk-Hee). Hyun-Woo begins to work part-time at the bakery store. At first, Mi-Soo is scared of Hyun-Woo, but they get close and develop feelings for each other. Hyun-Woo though carries heavy guilt from a fatal incident that occured in his past and he does not want to talk about that incident with anyone.

One day, Hyun-Woo's friends appear at the bakery store and they leave with Hyun-Woo. Mi-Soo believes Hyun-Woo will not come back. Their relationship does not end there and they cross paths several more times in the future.

Ocean Jan 23 2020 8:56 am This movie was so beautifully shot and so pleasing to the eye. Such a sweet story performed by two amazing actors with great on camera chemistry! This movie was soothing, sweet, warm and calming.

Mcprt Nov 25 2019 10:47 am This story should have been a series, there are so many things that can be added. Anyhoo, I hope Kim Go Eun and Jung Hae In make a series/drama together. They look so good together, they have this chemistry that even made Gong Yoo jealous (as he said while taping Goblin) and she is the best partner JHI have had. ?

Aly Nov 23 2019 8:39 pm I Loved This Movie A Loooot. I read a few comments and yeah it would have been cool if it was a Kdrama so we could have seen more of their develepment and many other things, such as ither characters stories. But I found it well made even as a movie! Love the leads' chemistry, they were so cute together ? It's seem unrealistic the fact that they would always meet each other accidentaly and then always reciprocated each other feelings instantly ? But yeah I guess it might happen since they both always waited for each other the meet again :') But yeah I enjoyed it a lot❤️

christina Nov 23 2019 9:01 am I depend heavily on subtitles as i do not understand korean. Sadly the subtitles here to me is a mess...direct translated from how korean is spoken so it doesn't make sense. As it is, I cannot comment on the story but am so happy to see my favourite, very talented Jung Hae-In and Kim Go-Eun together in a movie though I agreed totally with everybody here that they should be in a drama instead and hopefully those 'everybody here' include a producer or something like that....

Nick Nov 11 2019 9:55 pm Overall, I enjoyed the movie. However, it would have been better as a drama because there wasn't enough time for characters to develop. Like that girl (one who Mi Su got mad at for smoking) who is mean to Mi Su's Aunt? Where did she come from? We don't know mu They bring in the boss as this villain but he doesn't do much. Most of their (main leads) problems are character vs self. When he runs after Mi Su, where did his bruises go the next day, and why is his office gone? If it had been a drama, there would have been more time to flesh out these characters and allow the readers to connect more. The actors did a wonderful job, but the writing left something to be desired as their relationship (actors did a good job portraying chemistry) developed really quickly and was very strong but it didn't seem like their was much relationship building on screen.

Forgotten Soy Milk Nov 11 2019 9:47 pm Did he ever find the soy milk? Why was he looking for soy milk in the bakery? I have so many questions. Like why soy milk?

Bianca Nov 10 2019 3:22 pm Just finished this movie. The plot had so much potential that this would have been better as a Kdrama. Their chemistry was really good but so much did not make sense. Nonetheless, I enjoyed all the fluttery moments.

Igorota Nov 10 2019 12:18 pm These two actors are my favorite not just because of their looks but their acting is excellent, finally I can watch them together but I would like them to make a drama together as movie is too short, I am hoping to see them in a comedy romance drama!

Jo Jo Nov 08 2019 3:33 am I like the actors as they have real chemistry. But the plot is not realistic. It's very unusual that so many years will pass by and as if nothing's changed in their status. Then toward the end, the boss supposedly takes Mi-soo away from Hyun Woo. So what happened??? I thought she'd ran away with the boss. Then as if nothing happened. Anyways... hopefully they get to team up in a series because the movie is just too short. And the plot would be better. I'm sure they just tried to squeeze in everyhing in 1.5 hours.

Kyuhyunlover Nov 05 2019 10:30 pm Jung Hae in and Kim go eun never fail to impress. This was so perfect. Amazing music and cinematography. Not an overdone plot twist or storyline in sight. Just simple, good, innocent romance. Their chemistry doesn’t sizzle, instead it’s languid and electric, the skeleton on which this film rests. 9/10.

Arial Aug 13 2019 3:36 pm They look the best together because their personalities match so much.. Really cant wait to watch them. His voice made my heart flutter.. so excited.. oppa show us more n more of your work..

Vangie Aug 12 2019 4:09 pm Their chemistry never fails. They should have a series with them as leads

fireanddream Aug 11 2019 4:38 am someone please tell me name of the song in the end of trailer

Claudette May 04 2019 2:00 pm Looking forward to this movie, I really love both of them. I wish they would play in drama serie together, the movie is not enough.

Nux Sep 23 2018 4:30 am Totally looking forward to this ... YES!!! Kim Go Eun is my fave and very interesting to see her with Jung Hae-In. It will good to see them together again and I think it will be great.