The Wings of the Kirin 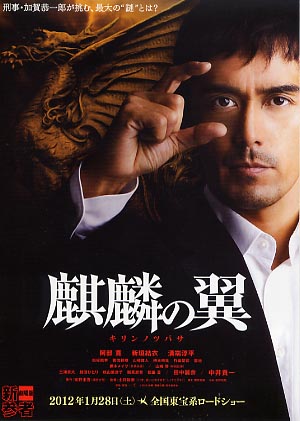 A man's body is found under the statue of a giraffe with wings in the Nihombashi area of Tokyo. A suspect named Yashima has a car accident and falls unconscious while he is attempting to run away. Yashima's lover Kaori comes from Fukushima and tells detectives that he is absolutely not a criminal. Meanwhile, Detective Kyoichiro Kaga's (Hiroshi Abe) investigates and uncovers a point of contact between the dead body and Yashima. A hidden fact of the victim is revealed which even his children did not know about ... Christine Jan 30 2016 5:09 am Probably my most favorite Japanese movie ever! The unexpected plot-twists and unending discovery of new mysteries left me jaw-dropped. I will definitely give this movie 10 out of 10.

nana858 Aug 04 2012 6:46 pm Wow, very similar and identical to Shinzanmono especially the music and the theme. I think this movie is a special of Shinzanmono because the name of the characters such as "Kyoichiro Kaga", "Yuhei Matsumiyais", and "Ami Aoyama" are the same.