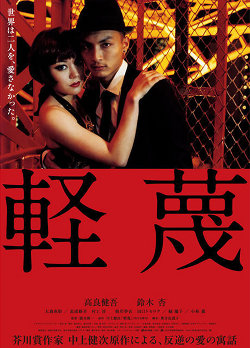 Kazu (Kengo Kora) lives in the Kabukicho entertainment district in Shinjuku, Tokyo. After falling into debt from gambling, he gets an offer from yakuza Ito (Jun Murakami) to trash the night club "New World" and his debt would be paid off. At the nightclub "New World," gambling goes on without permission from the gang which Ito belongs to. When Kazu attacks the bar with yakuza members, dancer Machiko Yagi (Anne Suzuki), who Kazu likes, is at the bar. Under this chaotic situation, Kazu takes Machiko from the waiting room and asks her to run away with him.

Machiko also has feelings for Kazu, who comes to the bar and always looks at her. They couple flees into the night and eventually arrive in Kazu's hometown. Kazu comes from a wealthy family, but his relationship with his parents is distant and cold. Kazu tells his parents that he wants to live with Machiko.

Kazu's mother Takako (Toshie Negishi) and father Kazuyuki (Kaoru Kobayashi) gave up on Kazu a long time ago. Nevertheless, his father allows Kazu to live in a nearby apartment that he owns. Kazu starts working as delivery man for his uncle Shinji's (Tomorowo Taguchi) liquor store. Meanwhile being surrounded by Kazu's friends, Machiko gets used to living in the country side.

One day, Kazu pulls a knife on his father because his father opposes their marriage. Kazu is filled with anger because his parents look down on Machiko. Meanwhile, a woman who runs a cafe tells Machiko what Kazu's parents thinks of her. Machiko goes back to Tokyo and starts working as a dancer again. Kazu shows up at the club and tells her that she is his wife and without him she is not complete.

The couple go back to Kazu's hometown and marry. While Machiko was gone, Kazu gambled and his debts snowballed. Loan shark Yamahata (Nao Omori), who has known Kazu since he was young, arrives ... CWA Jan 21 2016 7:15 pm There are movies which you will consider as good despite being unable to enjoy them, like for example Pieta. Still you usually don't regret watching those once. Though there are also movies which you can neither consider as good, nor could you enjoy them... sadly Keibetsu is one of those. I just asked myself why I urgently wanted to watch this one, expacting something big. Of course there is a cute lovestory, but the whole movie is just sad and filled with those "WHY???"-moments. Cannot recommend it.