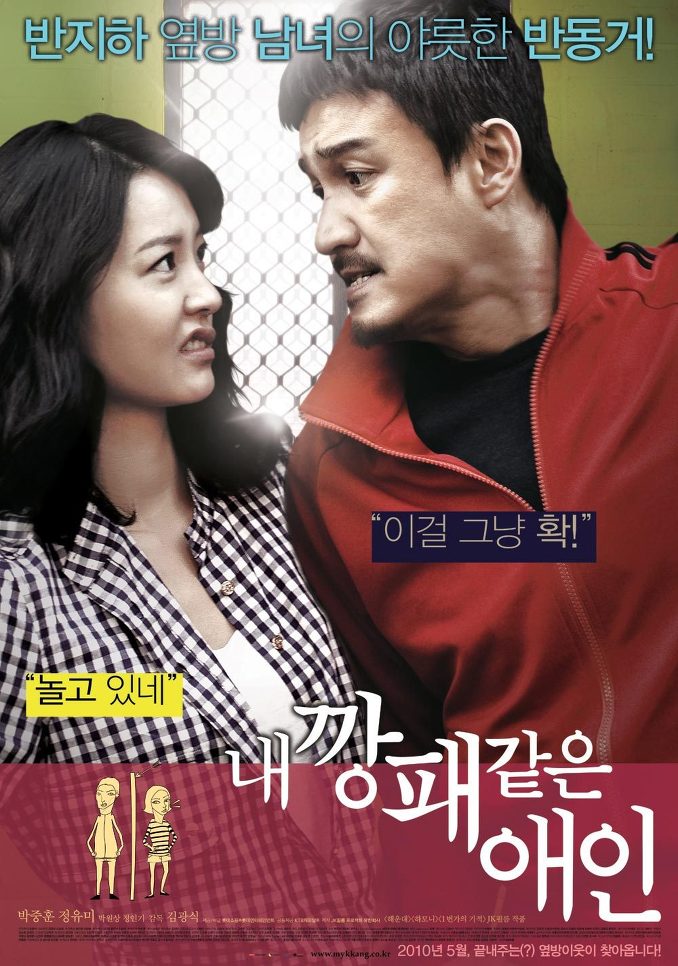 Se-Jin (Jung Yu-Mi ) leaves her small hometown for the big city of Seoul after landing an IT job with an upstart company. She initially enjoys the best days of her life in Seoul. Her job is going great and she has a boyfriend who works as a computer programmer. Se-Jin's honeymoon with Seoul soon comes to an end when her company goes bankrupt. Her boyfriend finds a new job and leaves Se-Jin behind. Se-Jin must also find a cheaper apartment to rent.

Se-Jin now moves into a poor area of Seoul while looking for a new job. Although she has quite a few interviews lined up, none of her interviewers will take her seriously. Furthermore, her next door neighbor is a strange older man named Dong-Chul (Park Joong-Hoon).

Dong-Chul (Park Joong-Hoon) is a low level gangster waiting for payback from his boss after going to prison in his place. In the meantime, Dong-Chul is usually broke, has bad manners, & has a hot temper. He first thinks of his new neighbor as an odd girl that's somewhat of a pain.

One day Se-Jin remarks to Dong-Chul "hey you look like a gangster what do you do for a living?" Dong-Chul responds "I am gangster". Can these neighbors get along? Will Se-Jin ever find another job? Will romance bloom between these two disparate personalities? AJAX Aug 17 2014 1:24 pm Superior film on all fronts. Surprisingly sweet, warm, and touching. Others have written excellent reviews here: you can trust them.

Paul Holmes Apr 24 2013 3:23 pm Korea has an amazing Cinema industry. Like the United States there's lots of fluffy boy-girl silly movies, some overly violent ones but there are real masterpieces, stories told beautifully. This is one of them.

I could have titled this review, "From Selfishness to Selflessness."

I believe the original title of this in Korea was "My Gangster Lover," which does not do any justice to the beautiful story told here.

I'm not going to go into many details -- just some of my impressions. Just know that what you're getting here is a beautifully told story.

Jeong Yu-mi and Park Jong-hoon are perfect for their roles. Dong-chol Oh (Park Jong-hoon) is a middle-aged gangster who finds little fulfillment in his life. Sae-Hin Han is a young woman of promise who, having grown up in the country, gets her first professional job in Seoul. Unfortunately the company goes bankrupt, her boyfriend leaves her for a job somewhere else and she's forced to find cheaper rent in a poorer neighborhood.

She soon finds she has moved next to an exasperatingly selfish man. When he walks out to see all her stuff outside and asks why nobody's helping her move in she tells him the movers wanted extra for that. Dong-chol expresses outrage that they wanted extra money for moving in, saying they must be a bunch of jerks (or something of that nature). Sae-hin's eyes light up with hope as she realizes her next door neighbor is outraged and now she will get some help.

It doesn't happen. As Sae-hin watches in disbelief, Dong-chol simply walks off and leaves her to the task, still muttering under his breath about how selfish these movers are.

You get the picture. She has to live next to this guy! And it gets worse before it gets better!

So what this movie is about is a guy who can feel empathy but just doesn't quite get that maybe he should be involved in the solution sometimes.

I love the way, writer/director Kim Kwang-sik weaves, in essence, 3 endings to this. The first is somewhat sad, but fulfilling. But wait, there's more. Still sad, but happy and you know that's the end. But wait! Oh, wow! Amazing!

Let me just say that Jeong Yu-mi's slow-motion smile at the end makes watching the movie to the end worth it!

HarryMatt Jul 20 2011 3:53 pm Very Different Romantic comedy.From the start its outright funny with encounter of the leads at diff.places.But slowly and gradually turns into a drama.i really loved the cute ending.I thoroughly enjoyed it.I highly recommend to fans of RomComs.

RamenLover Aug 21 2010 11:20 am Watched "My Dear Desperado" without having much expectations. To be honest I expected the movie to be a turd, but I just craved a good ole Korean comedy after watching so many hard-nosed Korean thrillers lately. Well "My Dear Desperado" isn't a pure comedy per se (though it had me laughing out loud more than a few times in the first half). Rather, the film is one of those quirky Korean films that starts off as a pure comedy for the first hour than turns a lot more serious in the second half. In the case of "My Dear Desperado" the change of pace works and never feels contrived.

Best thing about the movie is that the two main characters played by Park Joong-Hoon & Jeong Yu-Mi are so likeable & are underdogs in life. Although Park Joong-Hoon's character is built up as a hard nose gangster, his quirks and compassion easily makes you care about him as a person. The performances by the entire cast was excellant with Park Joong-Hoon standing out in my opinion.

The storyline goes from a romantic-comedy between uptight young white collar girl and older lower-class gangter man, but then switches gears into a drama with the problems of the white collar girl finding work, her relationship with her father, her relationship with the gangster, and the gangster's personal problems all taking center stage. The movie switches gears once again and turns into a straight nosed gangster film and making one last change with one really sweet ending. I was genuinely surprised by how much I laughed in the first half of the film and how genuinely interested I became in the second half's resolution. I would definitely recommend this film to anyone regardless of tastes. This is the kind of movie I would watch again, but with a group of friends.