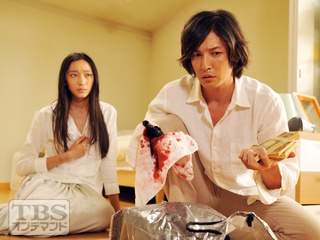 An elderly person who lives alone is shot to death in his home. Detective Inuyama (Shiro Sano) and other detectives go to the crime scene. There, they learn that the elderly person's 50 million yen that was hidden is now gone.

Meanwhile, a man (Hiroshi Tamaki) wakes up in the same apartment complex in Tokyo. He has lost his memory completely. He can't even remember who he is. The man sees the words "Level 7" tattooed on his wrist. He also finds a young woman (Anne Watanabe) sleeping in the room. Right next to the sleeping woman is 50 million yen in a bag and a handgun wrapped in a blood stained towel. The man panics and wakes up the sleeping woman. The woman has also lost her memory completely and she has the words "Level 7" tattooed on her wrist.