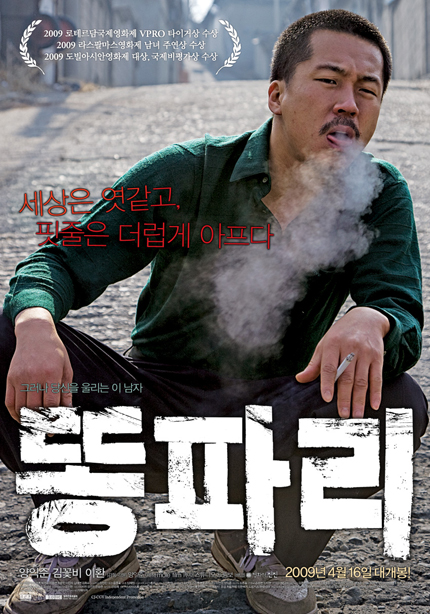 Sang-Hoon (Yang Ik-June) works as a low-level gangster collecting money for his longtime loan shark friend. Sang-Hoon seethes with rage due to his troubled childhood and abusive father. At any moment, Sang-Hoon can lash out at relatives, friends & strangers with the only way he knows how to solve problems - savage violence.

One day, Sang-Hoon walks along a residential road and spits on the sidewalk. He unintentionally hits a brash young high school student named Yeon-Hee (Kim Kkobbi). When Yeon-Hee tells Sang-Hoon to clean up his mess, he knocks her out with a punch to the face. Sang-Hoon then sits across from her until she regains consciousness. He offers to buy the girl a beer and the beginnings of an unusual friendship occurs. phikr1 May 07 2016 11:59 pm i literally drop my jaw when discovered yeon-hee's actress was already 24yo at the time, she portrayed her character perfectly and her face make it more realistic, she nailed it

asiacinemageek.net Feb 03 2015 2:36 am I just finished viewing this for the second time. This is indeed one of the most powerful films I ever had the pleasure of seeing. I was moved by the characters in this film, I recommend this to anyone wanting to view a film with engaged characters. This is a powerful piece of art that should not be missed.

jKay Jun 08 2011 8:32 am would anyone know the name of the instrumental in the closing credits? imho, it was equally as moving as the movie..

Om May 19 2011 4:36 pm Excellent film. No point in criticising a masterpiece with nitpicking. Great job by director and cast.

Fred Zobovich Jan 15 2011 9:09 am I just saw this movie for the second time and enjoyed it even more. I am very interested in seeing the next movie this talented director/actor will be involved with. The only thing that was somewhat distracting were the subtitles in terms of clarity and readability.

Andrew Carithers Oct 12 2010 12:21 am I saw Younhee Yangs work and was not very impressed, perhaps we can expect better next time...

sam saidelys Oct 03 2009 6:33 am the film literally did leave me breathless at times, the brutality followed by some of the most moving and gutwrenching scenes of tragedy moved me to tears on several occasions. Yang is a fantastic director and actor. A really brilliant cast provides the best movie since Oldboy. An instant classic is Ddongpari.

Though we may be referring to the same western culture, we do not seem to be speaking about same things. Maybe we should get that out of the way…

Me thinks, what is considered a) “socially not acceptable” or b) what actually happens within a society (google for reference: increase in abuse against elderly) and c)social phenomena as they take shape as themes in films (our subject at hand) are three very different things that have popped up in our exchange.

My 2 cents (no offense and merely to avoid misunderstandings)

bornloser Aug 12 2009 5:41 am Movie is coming out on DVD August 31st. I really can't wait to see this. When Korea gets a Gangster movie right, it's always an absolute pleasure to watch (Sunflower, A Bittersweet Life).

Willby Aug 02 2009 5:49 am Well the beating of fathers sure happens, but the beating of eldery and your *own* parents are not done, in no culture, and is therefore I consider it a taboo. it’s not like kids would beat up their own parents in the sixties, and it’s certainly not like they would get away with it back then. Socially not acceptable in our Western culture.

Yes and no. It is a taboo in every society but in a number of modern societies taboos in general are loosing ground – for a number of reasons.

In Germany, for example, the generation of fathers – that hailed the Nazis in the Thirties and failed to prevent the holocaust – took a nationwide beating of titanic dimensions in the Sixties. A lot of the civil unrest/student revolution in Europe originated from the disgust of the next generation that felt the teachings of those who had morally failed on such a historic scale should be buried along with them or at least questioned. So, of course this general frustration and unease leaked into films and media and we have number of films in which sons tell their fathers off or even physically assault them.

Willby Jul 30 2009 5:45 am Must see this. As for the parental thing, I agree that in Asian films the beating of eldery is non existant, but I think that’s a taboo in every culture. “Honor thy father and mother”

This was the first time ever, I saw an act of violence against the family patriarch in an Asian film. I asked Yang Ik-Jun about it in Q&A after the screening and he confirmed that for viewers raised in societies with Confucian principles still in place, this is the toughest part about the film - not the violence itself.

"Filial piety" kind of went of style in many Western societies some time after WWII, so I don't think beating up the father who messed up your life would strike a European as particularly taboo-breaking. But at closer inspection, a son spitting at his mother might elicit remotely similar reactions here.

That aside, what impressed me most was Yang Ik-Jun's acting. When you meet the guy? He is soft-spokenness personified. Impossible to picture his character on screen. Had to see it, to believe it.

Ki Jul 27 2009 12:18 am After watching “Breathless” I can certainly understand why the movie generated so much buzz at international film festivals earlier this year. The film features brutal gang violence, seething hatred towards abusive parents, and most importantly two main characters that captures your attention with their dynamic relationship and the genuine heart that blossums from their unique relationship. Just as impressive, “Breathless” marks the debut for Ik-jun Yang who takes the role of director, screen writer, and main actor for the film. The film isn’t a perfect film, it runs longer than what seems necessary & the story is conventional (down to its cliché “Carlito’s Way” like resolution), but in terms of sheer impact the film is extraordinary.

What you’re first likely to notice with “Breathless” is the unflinching violence that is shown onscreen. Ik-jun Yang opts for realism in a world were he may be intimately familiar with and, because of this, doesn’t try to sugar coat it with any romantic illusions of a mobster’s life. You’ll also hear way more Korean curse words than in any other film. Regardless of whether you have ever heard the Korean language spoken before, you’ll pick up on various ways to utter the word “Shibal.” If all this nihilism was just for the sake of realism than “Breathless” would probably be no better or worse than a porn film, but the lifelike characters and the dynamic relationships that sprouts out from all the violence works as the lifeline for the film.

The relationship between Sang-hun and Yeon-hee is something to watch as both performers excel in their portrayals. Ik-jun Yang as Sang-hun walks the streets as a raging beast and to his credit does wonders to bring out the frailty of his wounded soul. Kkot-bi Kim, who plays the brash young high school girl, has the daunting task to portray a young girl with similar problems as Sang-hun and she is able to do so convincingly. With her long straight bangs hanging over her expressive wide eyes, you can’t help to think of a young Du-na Bae when watching Kkot-bi Kim perform.

Where “Breathless” isn’t nearly as successful is in resolving its story. The screenplay is scorching for the first 90 minutes or so, but then ties all its loose ends in a drawn-out, clumsy manner. Perhaps there should be a rule that all first time Korean indie film directors shouldn’t make a film longer than 90 minutes (this year’s other standout Korean indie film “Daytime Drinking” suffers from the same problem). Nevertheless, if you don’t mind violent movies, “Breathless” is a film you should seek out. Its certainly the best Korean gangster film I have seen in a long, long time.