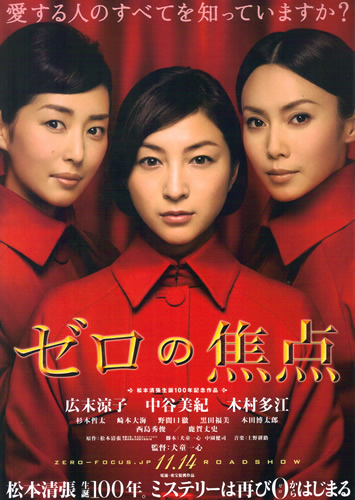 One week after their marriage, Kenichi Ubara (Hidetoshi Nishijima) bids farewell to his wife Sadako Ubara (Ryoko Hirosue) prior to departing for Kanazawa on a business trip. The couple met on a blind date through a matchmaker before marrying.

Kenichi promises to return to shortly, but never returns. Sadako then travels to Kanazawa to uncover his whereabouts. There she meets two women. Sachiko Murota (Miki Nakatani), whose husband owns Murotanae Yeolgiwa Company. The Murotanae Company once contracted Kenichi for work. Sachiko is currently working on helping a woman become the first female mayor. Sadako also meets Hisako Tanuma (Tae Kimura), a woman who works as a receptionist for the Murotanae Company. Hisako comes from a poor background and lacks education. Yet, she got the job through the owner of the company.

Meanwhile, there's a serial killer who first started killing around the same time of Kenichi's disappearance. Sadako also learns that the two women are connected with Kenichi in other ways. A shocking truth then awaits Sadako.