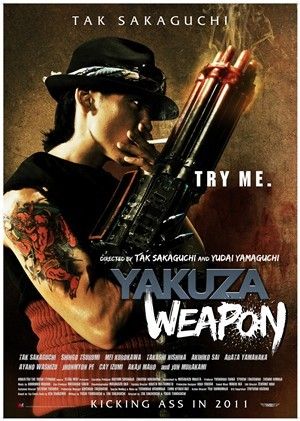 Working as a hard-to-kill mercenary in South America, ex-yakuza Shozo Iwaki (Tak Sakaguchi) is informed of the death of his gang boss father, Kenzo (Akaji Maro). Returning home after four years, Shozo discovers that his father’s number-one man, Kurawaki (Shingo Tsurumi), has double-crossed and assassinated Kenzo, leaving Shozo not only in charge of what little remains of the Iwaki Family, but also burning with the desire for vengeance. After a titanic battle in which an entire building is leveled, both Shozo and Kurawaki are left barely alive, Shozo missing an arm and a leg.

Despite his debilitating wounds, the nearly superhuman Shozo clings to life, and wakes up in a mysterious medical facility with an M61 Vulcan cannon in place of his right arm, and a rocket launcher where his left leg used to be! Although confused by his new body and tormented by the pain it brings him, Shozo quickly learns to love his weaponized frame, and makes himself ready for a rematch with Kurawaki, who also has some mechanical improvements of his own.

But before that, Shozo must also deal with Tetsuo (Jun Murakami), his former best friend who’s fallen into drugs and hard times, and has been coerced by the Kurawaki gang to find and kill Shozo! Nearly a match for Shozo’s strength and fighting ability, Tetsuo also has a mechanical secret: his younger sister Sumire (Cay Izumi), who’s been transformed into a naked weapon, using the same technology that gave Shozo his arm and leg! But can Shozo bring himself to destroy his own best friend, the only thing standing between him and final vengeance?-- Sushi Typhoon