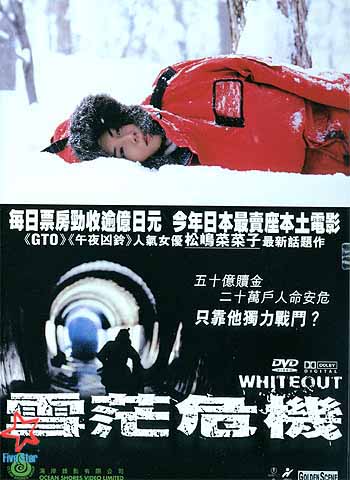 It was an ordinary rescue mission for dam controller Togashi Teruo (Yuji Oda) and his colleague Yoshioka Kazushi as they set out to assist a few climbers who met an unexpected blizzard near the Okutowa Dam. Unfortunately, Yoshioka was injured while helping the others and Togashi had no choice but to seek help alone. Things got worst when WHITEOUT - a meteorological phenomenon appeared and Togashi lost his best friend forever.

Meanwhile, with the most advanced technology, Utsuki Hirotaka (Koichi Sato) and his group of terrorists blow up the only main road to Okutowa Dam, the largest dam in Japan. They take over the dam along with the workers as hostages. They demanded JPY$5 billion from the government with a 24 hours deadline. To let the government know that they meant business, they decided to kill the hostages one by one unless they hear a definite answer from the highest government official. Among the hostage is Hirakawa Chiaki (Nanako Matsushima), Yoshioka’s fiancée whom Togashi promised his best friend to take good care of if anything bad should happen to him.

To make things more complicated, there was a snowstorm and no one can get in or out from the dam. Either the government pays the ransom or the dam will blow up along with the 200,000 residents living close to it. Fortunately, Togashi was not captured by the terrorists and he is now on his own to fight the well-equipped terrorists and to rescue both Hirakawa and the Okutowa Dam alone.