(Redirected from We Hope for Blooming) 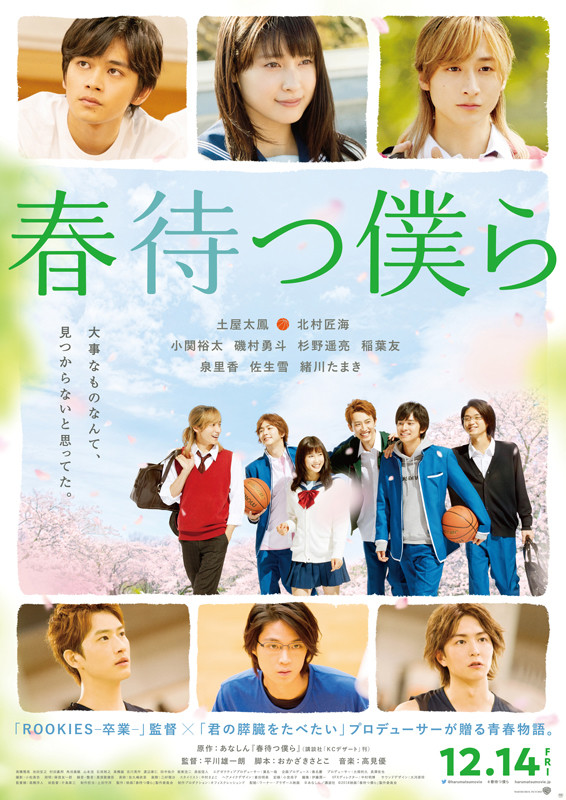 Rae May 25 2019 8:42 pm I'm an absolute fan of the manga and its author Anashin so I was really ecstatic about the live action film. The manga was cute and adorable, the film was, too. I thought though that the film didn't really portray well the bond between Mitsuki and the four basketball team members. But I appreciate it showing more about how Mitsuki overcame her personal hurdle, gaining her confidence and all.

ang May 17 2019 7:57 pm I love Harumatsu Bokura since I've read the manga but still haven't finish reading it because I forgot what chapter I am hahaha. So I'm having a second thought of watching the live action because sometimes, some actors/actresses can't portray their character well. But since I've finished watching the live action today, I'm very satisfied and Tao Tsuchiya did a great job here tho I still love her acting in Tonari no Kaibutsu-kun because she portray her character well.

For the actors except Yosuke Sugino (since I already saw him in other live action drama o movie), all of them are new to me. Tho I'm kinda sad at the end hahaha because I love Aya chan both in manga and I didn't expect to love him here too. ??

BSA May 16 2019 7:14 pm @Aya Generally you can't measure actors/actresses true talent in shoujos especially actresses , since heroine roles are so basic than the male leads to showcase acting skills , with Shoujo heroines its more about the appeal than acting , you can cast a D-list actress but has a cute next door appeal in a shoujo and will get away with it because that's the point in most shoujo adaptions , it's all about selling sweet eye candies actors/actress for fanservice and build them a fanbase in their rookie years , and with Tao you realized she shines in more interesting and complicated roles because that where her true appeal lies she is not your standard typical shoujo actress that her agency tries to aim her to be (pretty face with mediocre acting skills) and agency issues ruin great potential of actresses and actors , they are the main fault than anything and because of poor projecting & selling ,Tao haters exit.

Sorry for the long post just want clear my point and the misuanderstanding , and thanks for seeing her potential where some fans can be blind of hating ^_^

Ninochan25 May 14 2019 2:51 pm Y'all can say what you want about Tsuchiya Tao not suiting shoujo manga, but I'd say one of the best films she ever starred in was "Orange", and that was originally a manga. Although it wasn't a typical cheesy romance, she was amazing in that and I think it really showed her qualities as an actress. Of course I love Tao when she does action films, and comedy as well - it really suits her. But its good to have a versatile actress and yes, that does mean being able to star in Shoujo manga films.

Aya May 12 2019 9:03 am @BSA I'm one of those people who doesn't like her cutesy acts in Shojo movies and I'm glad that this is her last shojo project. I am not a hater of Tao, I definitely see her potential as an actress after watching Kasane. And hey, she did great in Tori Girl and My Little Monster. It's just that her acting skills are not projected well in romcom movies.

Nami Dec 27 2018 11:15 pm Happy that Aya will be played Yuta Koseki my favorite character I believe he is a decent actor from what I saw from him.

BSA Dec 27 2018 11:07 pm Good news! Tao officially confirmed that that this will be her last shoujo project and wearing school uniforms. I’m glad she will finally graduate from these and hopefully people will stop hating on her. I know it’s annoying when an actor/actress get typecast in roles that doesn’t suit them. But in the end she stated it’s not her fault nor she want to play cute JK roles in the first place. It was a discussion from her manager .She actually rejected Anikoma (another shoujo project) not just once but 3 times!!! Bc she knows she isn’t suit to play ordinary school girl and want another actress to take it instead but they forced it upon on her and she has to accept it. Now I hope this will be clear for everyone that she is not the fault here. I feel sad such a brilliant actress ended up being a victim of people hate just bc how she was poorly projected nor she it’s something she can control about it. Plus HaruMatsu got fine reviews and she wasn’t that bad. Also happy for Takumi , Yuta and all the cast seem to do well too.

Pat Nov 26 2018 12:35 pm I dont hate Tao, she is an amazing actress, but her shojo persona bores me... I mean, she has done many of the latest shojo manga based movies and it annoys me to see her repeatedly as a teenager... orange, PJtoK, my little monster (loved her here)...

Nozomi Nov 17 2018 8:33 am You all said like Tao dont deserve to play Mitsuki. I totally agree with that!!!! Tao don't deserve to play in this crap! I was happy finally Tao getting better project and got praises on 8 Year Engagement, Kasane and Pluto stage play. Even Japanese people reaction when Tao got role in this movie "why shoujo again? She could do better than shoujo heroine. Her agency sure know how to wasting her talent".

I dont get why Tao getting unnecessary hate. I cant stand seeing her co-stars fans treated her so unfairly.

Kimm Oct 12 2018 6:25 pm @abf48 tbh then I actually wished for Mei or Suzu to play Mitsuki instead since they have shoujo faces, Tao is way more versatile than to play such a boring character too bad she is often wasted in these roles :/

Syafira Tidarasari Jul 16 2018 6:00 am Takumi and Sugino-kun in one movie?! This movie will be awesome! And I'm a fans of Haru matsu bokura's manga too. I can't wait to see this movie.

Emily Apr 15 2018 10:00 pm Seriously I have a massive crush on all 5 gentlemen ❤❤❤❤❤ after checking their sns. They all have unique charms and I instantly became their fan! Mouthwatering men! ?

My precious Mar 28 2018 7:10 am Quit complaining/bashing and start appreciating. If you dont have anything nice and positive to say, keep it to yourself. These actors and actresses are very passionate about their job and are working hard to expand their horizon. I read the actors thoughts on their social media and they are very excited about this project.

I'm a mega fan of this manga. It's very cute and adorable. Though I initially opted for an anime, I changed my mind when I saw the cast. I think they are all beautiful people. #excited

Susan Mar 17 2018 3:14 pm It seems like the cast was choosen because they know how to play basketball. Tao, Yosuke and Yu played basketball during their highschool years. Though Mitsuki (the female lead) doesn't need to know how to play the sport :p. Anyway, I'm looking forward to this because of Tao and also because it is a reunion for her and Takumi (since Suzuki Sensei) and also Yosuke (Anikoma).

Yuna Mar 13 2018 11:54 am i just hate those people who keep on bashing these amazing actors and actresses playing in shoujo movies and dramas. i mean, they're mostly in their early twenties. they have long journeys to go! geez. almost all famous japanese actors and actresses have played shoujo in their early years in the entertainment industry. yes, they are way freakin talented to get so many projects every year. so what if all of those are shoujo? they played their parts well! so i suggest you wait for the perfect time for them to get and accept other roles (e.g those "darker" roles that most of you bashers are sooooo longing for) for now, if you hate them playing shoujo, then dont watch

NouEN Mar 09 2018 12:25 pm @Karen Khoo that's the effect after Orange big hit because it's sell over 3 billion yen it's explained why many shoujo offers comes for these stars sadly and fallen as a victim of their exposes. Tao is way too talented to aim for youthful girl comics. She is suited for dark roles and slice human theme stories but well what can we do ? hope it's her last to be in these stuff.

Karen Khoo Mar 09 2018 5:17 am Tao-chan is going through what Yamaken faced when he shot to stardom by acting in almost every shoujo live actions being made. Don't worry guys Tao-chan will eventually get to accept other roles sooner or later.

NouEN Mar 08 2018 2:07 pm What a big waste for a good talented actress to be casted in another shoujo LA , it's sad her agency are forcing her in these stuffs and it's out of her control. I have wished other new young actress casted in this instead. But glad for Takumi though

Asakura-kun ↔️ Aya-chan Mar 08 2018 12:31 am Mitsuki-chan you can take asakura-kun, but then I’ll take aya-chan... hahaha.. I hope this live-action didn’t dissapoint me. I’m dying to know the ending of the manga as I just read it through mangarock..