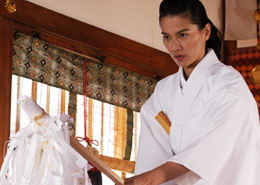 Thirteen years later, Kiriko (Makiko Esumi), her ineffectual banker husband and their two kids return to Japan after having spent 13 years in London, where her husband had been posted.

Kiriko has enjoyed the expatriate life and is not keen on returning home, especially since home is the Shinto shrine compound that her in-laws supervise. Mother-in-law Yoshiko is determined that her son take over the shrine when they retire, and she's disgusted with the Western ways that the family has picked up abroad. Added to this volatile situation is Kiriko's sister-in-law, who now also lives in the compound with her husband.