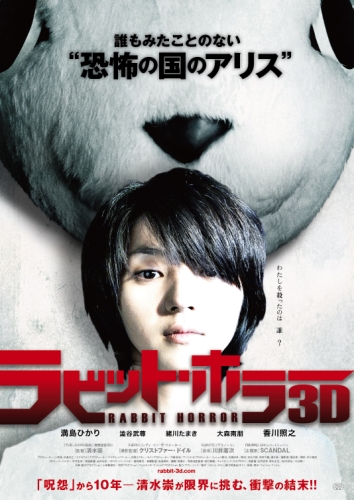 A young woman searches for her younger brother who was dragged away into an alternate world by a rabbit ...

10-year-old Daigo (Takeru Shibuya) kills a sick rabbit on the school playground which he adored. The other kids call him "rabbit killer." Since then the boy has stayed at home and has been tutored by his sister Kiriko. Kiriko's mother died of an incomprehensible disease 10 years ago. Since that time Kiriko has not spoken. Their father (Teruyuki Kagawa) is distant & also silent, working away on his storybook illustrations.

One day, Daigo and Kiriko go to watch a 3D movie. A rabbit suddenly pops out of the screen and Daigo attempts to grab it. That night, Daigo is lured into a strange world through the stairs in their home by a rabbit doll ... Coffee & Cigarettes Jul 11 2011 4:50 am Will this be released in cinemas in the UK after September (limited release only obviously)? Also who plays who? This looks awesome!