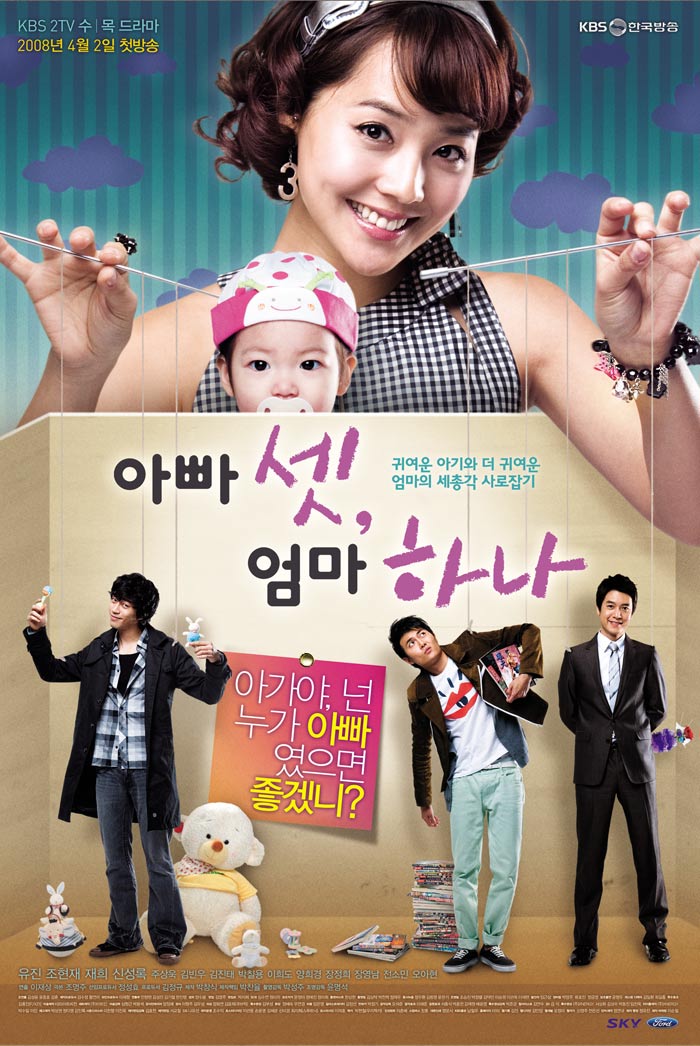 Song Na-Young, a 29-old-single mom, goes through the baby care with help of three best friends of her late husband. Na-Young, born with natural optimism and somewhat recklessness, just lost her husband and depends on three distinctive characters. Han Su-Hyung is a competent fund manager and most successful among friends, but most narrow-minded and stingy. Gwanghui is a handsome cartoonist with good taste of fashion, but an ultimate cynic. Gyeongtae is a young and good-looking detective, but too shy to speak in front of girls. Three guys at first feel burdensome when Na-Young asks for support. As time goes by, however, they start to feel a deep emotion toward the baby and to Na-Young as well.

JHlove Apr 16 2019 9:06 pm Loved the 3 fathers here but Jae Hee's role really stood out among the rest. In the drama, I observed that character development was more evident in his role. Kwanghee <3

morg Jun 27 2015 4:41 am that bastard shin sung rok really played well, i just realize he was that scary villain in recent dramas.

Neoruel Feb 09 2015 11:16 am This was my very first korean drama that i've watched. Back then I was 11 years old.. Omaigad i was young back then lmao. Time flies so fast. I really miss this drama. I need to re-watch this again..

Fraulein xiong Nov 26 2014 11:27 pm Love this drama! So glad shin sung rok is still acting! Love him!! So sad. Idk where else to watch three fathers and one mom

Ayea May 09 2014 10:16 am This drama = watchable, mainly because of the "baby" and "toddler" … and, there were some really hilarious moments. Shin Sung-rok's character got really annoying around Ep 10 and I blame the writer for his overacting since he was the best in the first few episodes. As for the ending, it is the first time I thought the writer really screwed up (and I have watched about 100 K-dramas). There was no need for the "ending with a twist." It absolutely did not make sense … it did not follow the story of the last 1-1/2 episodes.

wisa Feb 23 2014 3:34 pm One of my favorite dramas I have ever watched. I have never seen a drama like this one. I am so glad that I came across this drama. The actors were just amazing you fall in love with each one. I love how it starts to the middle and to the very end, not a boring part. Trust me you will probably finish this drama less than a week. I highly recommend this drama. You will not regret.

Toni Feb 09 2014 12:00 pm This is one of the best dramas ever. Hilarious, very funny guys; what a great casting of the three guys and Eugene. They were fantastic. Haven't laughed or cried this hard in a while. Really touching yet comedic - what a ride. Everyone will enjoy this one. Can't recommend it enough!!!!!!!!!!!!!!!!!

Dianne Dec 24 2013 12:39 am As I'm trying to watch as many of Jo Hyun Jae's dramas as I can find online, this was the most recent one I've watched. I laughed and cried, but mostly I laughed at the crazy antics of the three "dads" / "uncles". To watch these three guys grow up on screen before our very eyes and learn to take on responsibility with such love and affection -- well, it was amazing to watch!!! ALL of the actors were superb -- even the little girls they used for the "baby" that changed their lives was fantastic! I would recommend this drama to anyone who likes to see not a normal family (mom, dad, 2 kids) and how they bond together... I would rate it 5 Stars.... as they had me from episode one :) Thanks to the cast for the fond memories that I won't soon forget!!!

Clarkdale44 Dec 23 2013 6:10 pm This drama is full of hilarious things which cannot be explained in mere words. But believe me that you won't regret it. Its way too funny beyond the limits. It was categorized in Romance that is why i watched it, but there is nothing like romance in it. So all this drama has is these three guys learns to be mature by taking care of baby. I will give it 6/10

Ronaldo Nov 01 2013 9:32 am I really really like it!!! awesome! there's no minute or second that I feel bored watching it. It shown the complete aspects of life.....work, friendship, romance, parenthood and family. I highly recommended this tv series for viewing. It's power casts, inspirational and really entertaining....aside from eugene and jae hee, I able to know from this show, another great actor...jo hyun-jae

behnaz Feb 25 2012 2:40 pm first korean drama I purchaced. up there among my top ten favorite drama ever I have watched. I love all character.