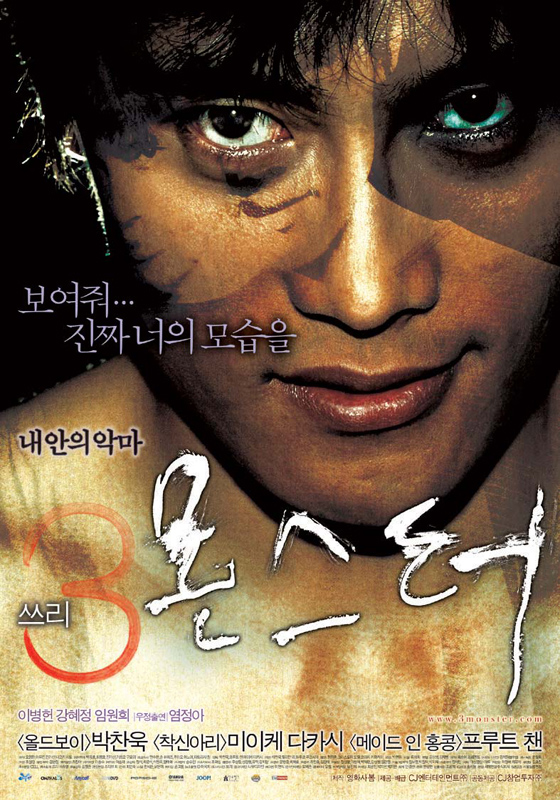 Dumplings A former TV star (Miriam Yeung) is still attractive, but no longer acting. Her husband goes on long trips without her and doesn't even bother with alibis. She turns to a woman (Bai Ling) she has heard about -- a perky, cheerful type who works out of a small apartment in a high rise. This woman cooks and serves dumplings. "How old do I look to you?" she asks her client. The actress guesses -- oh, about 30. I would have said even younger. The cook says she's a lot older than that.

The secret is in her dumplings. The actress pays for an order, looks at them dubiously, eats them, comes back for more. She thinks she looks better. I

Box A reclusive, guilt-ridden writer with a stunned relationship to her publisher remembers the horrible death of her twin sister, whose presence begins to be felt in the real world.

The Cut A famous director and his pianist wife are held hostage by a disgruntled extra in a rigged film set where the director must strangle a little girl or watch as his wife loses her fingers.

Brian Harris Jul 03 2010 4:03 pm The first time I saw Three…Extremes, I was surrounded by slumped bodies, schwag for The Fog remake, and about five empty cans of Red Bull. It was October 2005, three in the morning at a horror filmfest, and we had already watched Black Sabbath, Demons and The Brood. Over half the audience was extremely asleep and dead to the world when the film began. I, however, was so caffeinated I had developed the ability to smell colors. It was the first time that Three…Extremes played in Ohio, and good goddamn I was not about to snore my way through it.

Right out of the gate, the first segment of the trio of short films is jarring as hell. “Dumplings,” directed by China’s Fruit Chan, follows an aging actress’ (Meme Tian) pathetic and horrifying desperation to regain her youth. She can’t get work like she used to, her husband is losing interest, and she’s pretty much willing to do whatever it takes to turn back the clock. She hears of a woman (Ling Bai) who makes dumplings guaranteed to work magic, and hey, spoiler alert, the secret ingredient is baby meat.

The plot from then on is fairly predictable and would be more shocking if it didn’t seem to be trying too hard at times. The message is obvious and heavy-handed (“Don’t sacrifice your humanity for the sake of vanity, kids!”), and some of the bits of gross-out just seem gratuitous. Although, I have to admit that the amplified “crunching” sounds were super effective. “Dumplings” is creepy and entertaining nonetheless–it comes across like a well-done episode of “Tales From the Crypt”: a bit garish and cartoony but groan-inducing and fun to watch unravel.

The second short, directed by Chan-wook Park, is the most intense, the most outright violent and has by far the most blood. A beloved and ultra-friendly director (Byung-hun Lee) has pissed off a long-faithful extra (Won-hie Lim) by being too nice of a guy. The extra hates himself and what his life has become, and he cannot stand the fact that the director is not only successful but is also a decent person. In his mind, the poor and disadvantaged should be good people and the rich should be evil.

In a desperate attempt to “correct” the situation, the extra kidnaps the director, the director’s wife and a strange girl and holds them hostage while he forces the director to choose between committing bad and worse acts. A lazy man would compare this to Jigsaw’s games in the Saw franchise. However, since Chan-wook Park is directing, the story is told with far more humor and intelligence. The ending is extremely satisfying and unforeseeable.

Although I love “Cut”–it’s a terrific slice of vengeance cinema executed with Park’s typical “cautionary tale” flair–it is my least favorite of the three segments. At first, I couldn’t put my finger on exactly what it was I didn’t like about it, and then it occurred to me that I wanted horrible things to happen to all of the characters. None of them seemed remotely likable or sympathetic, and that usually leaves a bad taste in my mouth. My consolation was that horrible things do, in fact, happen to all of the characters, so that gave me a renewed spring in my step and a twinkle in my eye.

The final segment is “Box,” a deeply surreal and disturbing film that examines the inescapability and physical manifestation of gnawing guilt. A young woman (Kyoko Hasegawa) is suffering from a recurring dream where she is buried in a box in snow drift. Following a series of haunting flashbacks, we learn about her troubled childhood which is beset by sibling rivalry, jealousy and pedophilic exploitation.

“Box” is by far the most visually beautiful segment and the most subtle, although it’s not difficult to appear subdued next to fetus-gobbling and finger smoothies. Takashi Miike reprises the approach that he perfected with Audition: a slow-burn, vaguely romantic build-up followed by a shocking, disturbing climax. However, “Box” is far more abstract than Audition and leaves you unsure as to what is real and what is only in the protagonist’s troubled mind.

Because of its gorgeous cinematography and lingering effects on my headspace, “Box” is my favorite segment from Three…Extremes. The fact that I was somehow both wired senseless and barely conscious when I first saw it added to its impact, but it can just as easily give me chills on my couch in the middle of the afternoon.

Although I didn’t like all of them at first, I have come to love each segment individually, and I think they work beautifully together as a package deal. Despite the fact that I definitely have an order in which I favor the shorts, I don’t feel that any of them are weak or sub par. I say this because I have a few fanboy friends who have almost come to blows over which segment was the best, which was the let-down, blah blah blah.

What is important is that despite any preferences for one or the other, all three shorts boot you square in the face in three beautifully different ways, and who could ask for more? (Review by Jessica Teaman @ Wildside Cinema)