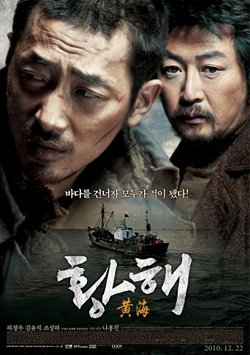 On the Chinese side of the China-Russia-North Korea border, in the Yanbian, Korean Autonomous Prefecture, Ku-Nam (Ha Jung-Woo) toils his days away as a taxi driver. When he's not working he's often found in the gambling halls. Ku-Nam is now in serious debt. His wife left to work in South Korea and promised to send money back. He has yet to hear from her and he is tormented by nightmares of her having an extra-marital affair. Making matters worse, Ku-Nam is fired from his job and debt-collectors take most of his severence pay.

Dog seller and underworld crime boss Myung-Ga (Kim Yun-Seok) offers him a deal. If Ku-Nam goes to South Korea and successfully carries out a hit he will get paid ¥57,000 ($10,000 USD). Ku-Nam accepts the deal and leaves for Korea on a rickety fishing boat with $500 dollars for his expenses.

When Ku-Nam arrives in South Korea he carefully scopes out his target for days, while also searching for his wife. When the time arrives for Ku-Nam to take out his target, a string of unexpected events occurs leaving Ku-Nam desperately looking for a way out. Meanwhile, the cops, Korean mafia, and the Chinese mafia all frantically search for Ku-Nam ... wayer Jan 08 2019 5:17 pm Watched The Yellow Sea without knowing it was from The Chaser director. The gore violence is sickening but suits the gangster-ism. The mystery behind who is the real culprit and the lost of Ku Nam's wife were well written too, the ending for him is justifiable although not wholly fine T_T. My respect for actor Ha Jung Woo is elevated even more hoho.. and Kim Yun Seok, his stability and macho aura just fills up the screen everytime he appears. During the chasing inside the pier, I wished that the Director just please let Ku Nam die and stop punishing him more..hahaa

Honey Nov 08 2016 6:55 am Omg TOK's comment below is super spot-on. I hate that we can't reply or thumb up comments here omg... You spoke my mind bro. Kudos to you. I agree that Korean acting somehow is deeper and has more layers (not to say US acting is shallow.) And even I was thinking about the possibility of this film being much greater if it was made with the cinematographic level of Mr. Vengeance.

Aj Sep 26 2015 8:18 pm Ha Jung Woo is excellent in this intricate action film, though it's a bit too bloody for my preference and has plot holes that stretch credibility. I liked him better as the romantic lead in Never Forever. Still, this one is very good of its genre.

See, everything about the movie was great. Action scenes, acting, the plot - at first, then it starts to fall apart in the 3rd and 4th. A whole slew of characters were introduced, and for a very long time, I kept going "who is that?". I'm not even sure who the lady was in the end.

And whats with the cards? He magically have cards with so many names on them, it just does not make sense. Especially towards the end when he and that guy behind the counter were having a face off. Who the hell was he?

Perhaps I didn't get to fully enjoy the movie because the sub were terrible. But I had no other choice as my freaking Netflix kept crashing on me, so I had to watch a poor-er version.

But even with that said, there weren't a lot of dialogues to distinguished who is who in the very last two parts. So maybe it doesn't even really matter on how good or how poor the subs are.

Overall, I really liked this movie for the first half, but it lost me completely after that. Quit disappointed that that had to happened towards the end when the movie opened so strong and so good.

domain registration yahoo Jun 28 2012 4:20 pm Great post. I was checking constantly this blog and I'm inspired! Extremely useful info specifically the remaining part :) I take care of such information much. I was looking for this particular information for a very lengthy time. Thanks and good luck.

what really bad about this movie are these things below: (No Spoilers)

- People expected a lot (because of 'the chaser' team and also after they have watched 'i saw the devil') - Bad Editing - Confusion over the name of the characters (who is who and such) - Not much details about some important minor characters (they just come from nowhere) - 2nd Half (rushes too quickly to the conclusion making it complex situation and on confusion) - Camera Shaking too much (Esp. Car Chase Scene.....How could the director who made the Great movie 'the Chaser' made such a terrible chasing scene in this movie?....i just can't believe it) - the basement scene (they should have made more violence there because before this scene, there was). - Escpae scene (too close and can't catch at all? there should have some gap between them) - Violence (it's too much for some people) - the ending (hardly satisyfying)

Nonethelesss, this movie is worth a watch if you don't expect and if you focus on the characters and go with the plot. 1st half is pure awesome, then 2nd half lacks details and rushes quickly at which people get (Freaking) confuse and therefore, dissatisfies with the movie.

If this movie were made like 'Sympathy for Mr. Vengeance' in terms of cinematography and in slow intense in the 2nd half as well, this movie would have been really really Great movie, would have been a Masterpiece, for sure. Forget the 'Old Boy' & 'Lady Vengeance' for now as both are modern art fantasy films, but 'Mr. Vengeance' is pure plain classic cinematic slow style film. Most People can't touch this vengeance for second time once they have watched, because they fear this Vengeance. and the other two vengeance aren't much disturbing as this one even though they still are.

Anyway, the director should not make US remake. korean Movies fans like me can't feel the US remake because the Hollywood actings aren't powerful like the Korean actings. I can feel the korean actings through my heart, mind and my whole body emotionally like i am inside him/her or around him/her....But Hollywood actings is like...I'm just looking at him/her acting or doing things this and that and the movie finishes like that. No feelings or emotions at all.

Okay, so if the director wants to remake, then there is nothing wrong with the Korean remake Again, with the same Great cast but as almost completely as a 'Mister Vengeance' style.

Ben C. Jun 01 2011 10:39 am The movie was very slow and it showed Ha, the taxi driver, was being hit and picked on by the debt-collectors. The movie went from slow to a fast phase and showed Ha as savage killer now--the director jumped to a quatom leap to develop Ha as a killer. Myung-Ga who hired Ha to pay off his debt could have done the killing himself--he killed the two guys in his hotel room and kidnapped Tae-Won's man. The movie is unrealistic with so many injuries sustained by Ha (got shot in the left upper arm, axed and stabbed in the port) but yet managed to evade dozens of killers--oh Ha swam too and lift himself out of the water too and ran hubbling and got in the truck. Myung-Ga got stabbed in the side and in the back, and axed in the back too but yet managed to kill a dozen more mafias--also good killers. The movie is not convincing and unrealistiic. I could not understand why Myung-Ga would hire him but wants to kill him now after accomplishing his mission. I gave it 10 for violence but overall it's a 3 out of 10.

Ki Dec 29 2010 3:00 am "The Yellow Sea" is a grim, tension-filled, thrill ride that will leave viewers exhausted (in a good way). As you can tell I loved "The Yellow Sea" and it actually does well to cement Na Hong-Jin as one of the top young directors in South Korea. The movie is long (156 minutes), but I didn't notice the longer than normal run time. As most knows, Na Hong-Jin brings back Ha Jung-Woo & Kim Yun-Seok who all worked together in the epic thriller "The Chaser". This time around, Ha Jung-Woo delivers his most demanding and nuanced performance to date. He's pretty much the sympathetic (and somewhat pathetic) "hero" - a man caught in the wrong place at the wrong time. The action scenes in here are also superb with the much talked about car chase scene in Busan just wrecking havoc everywhere on the screen. 2010 has been a great year for Korean cinema if you can stomach all the grimer & more violent films put out this year. "The Yellow Sea" caps off the year with one of the best films (can't wait to watch it again whenever it hits DVD) ....