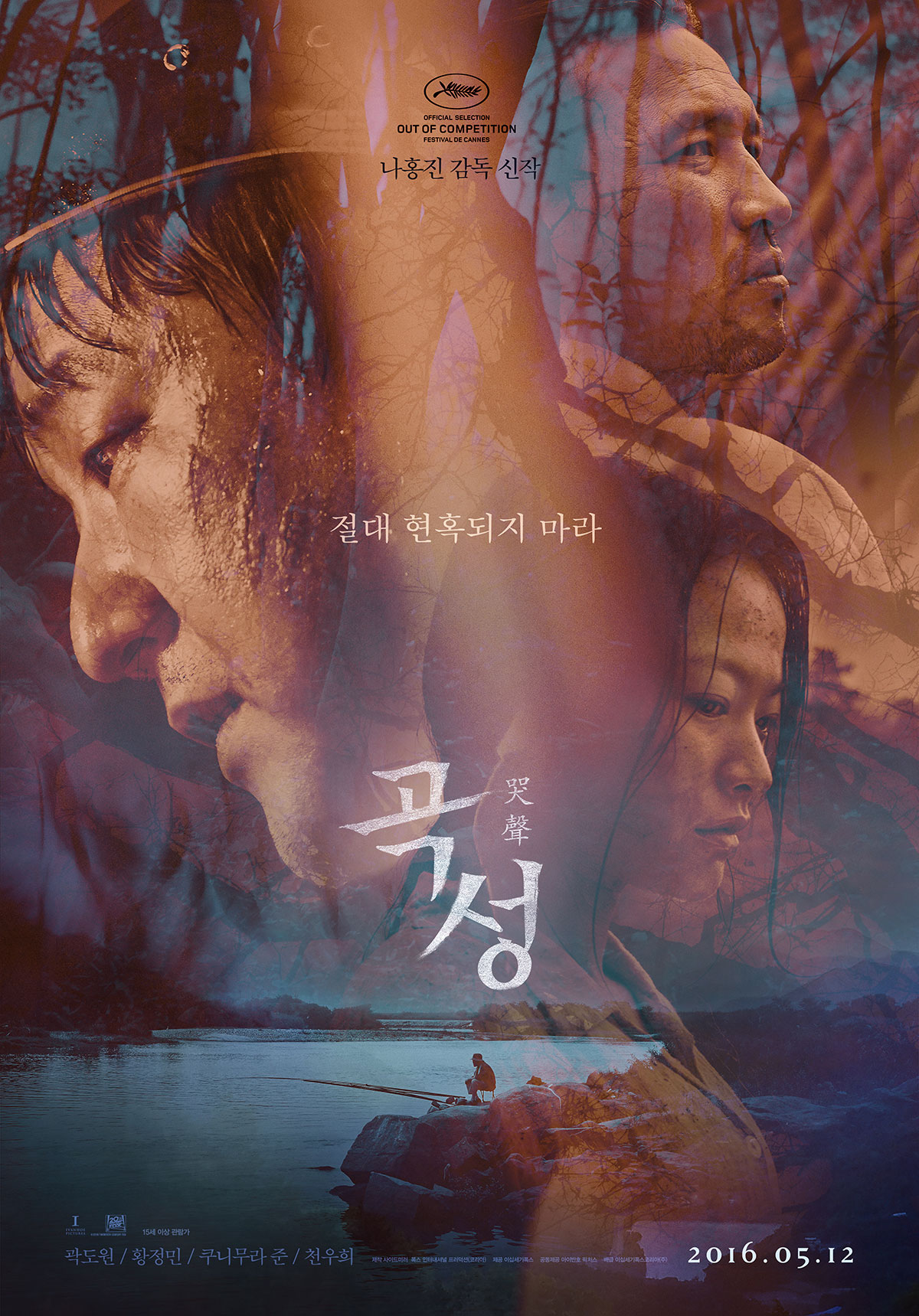 Within a seemingly peaceful village, a plague of mysterious & violent deaths suddenly take place. The police conclude poisonous wild mushrooms are the cause of the deaths. Police Officer Jong-Goo (Kwak Do-Won) hears a rumor from a coworker about a mysterious Japanese man (Jun Kunimura) living nearby. The rumor fingers the Japanese man as the man causing these mysterious & violent deaths. Jong-Goo, while on duty, meets Moo-Myeong (Chun Woo-Hee). She tells Jong-Goo that she saw the Japanese man where the last deaths took place. Jong-Goo's doubts about the man begin to waver.

Jong-Goo's daughter Hyo-Jin then comes down with the crazed symptoms similar to what the other villagers had before their deaths. Jong-Goo becomes desperate. He heads out into the mountains to find the old Japanese man's home. Meanwhile, his mother-in-law calls in a shaman, Il-Gwang (Hwang Jung-Min), to perform an exorcism on Hyo-Jin. Death lingers in the air.

wayer Mar 30 2020 4:22 am I get nightmare from this movie. From the ending scene, where the priest meet the devil. Demm. Brilliant movie, I totally believed the shaman. Shaite.

Stechira Feb 10 2020 8:06 am This movie deserves the attention it gets because the acting was good and it will keep you in suspense even after it ends but I didn't like it. It was too long, wasn't scary but it was creepy and the most annoying part of it was that it was confusing af. Even after it ended I was left with so MANY questions.

drinkme May 26 2019 2:48 am the movie being the long ass with 2 hours 30 minutes.its boring. the only interesting part was when a zombie guy attacking the cops. well u can try to watch it if u want. this is just my opinion tho...

san Aug 05 2017 11:11 am I highly recommend this movie, it is a whole new experience even though it's 2hrs but you will be thrilled the whole time. I dont usually watch horror movies but i heard good things about this one so i decided to give it a chance and I loved it, now its one of my favourites and I'm definitely going to watch it again, its one of those rewatchable movies. not to mention the unexpected ending.

this is such a great movie! i don't understand why people didn't get the ending, isn't it obvious that Moo-Myeong always try to catch the demon and keep the villagers save by putting a flower protection around the house everytime he (Japanese man) targeted a new family? and the shaman (Il-Gwang) is the demon's disciple since the beginning because he has those villagers' pictures (before-after their death) which the police officer has found in Japanese man's house but suddenly dissapeared when Jong-go tried to look for it.

CKW Feb 28 2017 11:52 am Brilliant movie. Beautiful cinematography and art direction. Well acted and smartly written. The simple minded kdrama fans wouldn't understand such a nuanced movie as this, as shown by the lack of insight in the comment section here.

T_T Jan 16 2017 10:30 am Bad movie. But I think it still worth to watch..Too long, the part of the police and friends beaten the "zombie" was too long. A lot of twists, and it's confusing af. Not understand the ending at all. Like what a stupid ending. Better they make the wailing 2 to solve the unanswered question. MY BIGGEST QUESTION: WHO IS ILL-GWANG?? I just wasting two hours watching this movie.

Sunny Dec 22 2016 6:11 pm This movie kept me on my toes from beginning to end. For such a long movie, I didn't think that would be possible. There are usually parts that drag, but this one didn't for one second. Great acting and a bit creepy, but not scary, in my opinion. However, I can't say it's one of the best movie I have ever seen because I was disappointed by the twist. I just feel that it wasn't necessary. The way the movie was flowing up to that point was great already, but I guess the director didn't want it to be that way. The twist actually leaves the audience with MANY unanswered questions about everything that happened rather than just the ending. It seriously twisted the entire storyline into something complicated and puzzling.

LegolasHair Oct 20 2016 5:56 am By the 2nd hour of the movie I thought I had figured out everything but no...the final 15 minutes got me switching my opinion from this to that

The unnamed girl actually tried killing off the demon by setting a flower protection trap around the house everytime he targeted a new family. I think the shaman got possessed while trying to leave the village that's why he returned back to take pics of the dead to capture their souls.

This movie was a brilliant watch....shook me in the end.

LegolasHair Oct 19 2016 12:35 pm By the 2nd hour of the movie I thought I had figured out everything but no...the final 15 minutes got me switching my opinion from this to that

The unnamed girl actually tried killing off the demon by setting a a flower protection trap around the house everytime he targeted a new family. I think the shaman got possessed while trying to leave the village that's why he returned back to take pics of the dead to capture their souls.

This movie was a brilliant watch...shook me in the end.

erika Oct 13 2016 10:09 pm This movie sared me to death omg the Japanese person was very scary jung min and woo hee characters also too they did great job but there's something I can't understand it why all this heinous crimes happened in the village. Did jong goo do a bad thing ? Also ill gwang and Japanese man are both devils? I just can't understand the end ×_×

ECO Oct 02 2016 4:11 am The good part of this movie is not paying attention for the big finale but in understanding the smaller sensible things that we miss from the beginning which makes sense only in the end its layered then we think, plays a good game of deception.

sheng Sep 28 2016 1:53 am That moment when an episode of Let's fight ghost where Kang Ki Young copied Hwang Jung Min's style in the movie "The wailing." It was so funny during the car accident episode. The hairstyle and outfit were so alike. I can't stop laughing.

Lilian Jul 24 2016 7:59 pm Same here! Kim Hwan Hee was so adorable in Happy Together! Planning on watching this movie tonight!

Cocojae Jul 13 2016 3:27 am @Cey: The girl is like the village's protector. Not sure if she's really a human or not. At the ending scene she was like screaming as she feel frustrated that she cant protect the village.. as the policeman didnt trust her. She hangs a trap at his house door but since the policeman already go past it.. it wont work anymore. Supposedly if the shaman go past the door first, he's gonna die or vomit blood again or something. Lol. When the old man turns into demon and start taking picture of thr priest.. it was really funny lol i can't even.

I'm excited about the horror special ^.^

Cey Jul 10 2016 10:10 am Okay I expected something Very scary, but ended with a confused yet ok movie... its different i like it but its not scary... FYI for those questions yes he's on the demons side I Think (end he was chill when going in to the dead peoples house)... my question is so is she (the white dressed girl) a ghost or just another shaman? Best regards from DK/TR/KD

elica Jul 07 2016 8:36 pm @agassi i think i know two of ur questions except the last one the first is because the girl(ghost/protector) knows the shaman was already on the demon side.. i noticed when the shaman was with his other customers.. thenhe flip 3 coins.. i noticed the smirk before he says "he took the bait" then with all the crows that shows after he saw the girl... and accrding to what i read in the reviews.. the shaman was already helping the demon take over the village hence the picture that falls from the box.

2. the pictures are the ones on the japanese mans home..remember when the policeman ask the jap man where the photos on their 1st visit was he said he burned it already.. yet it was on the shamans box.. and think about what the other police man said when he firt found the pctures.. he said there was this things of the victims, a picture BEFORE they died and AFTER they died... so my guess is that the demon takes pictures on the victims after they(victims)saw the demonic form of the jap man(the priest and demon scene) then after they died the shaman takes picture of the aftermath(the fam of the policeman)

ahhhh! my head is spinning but for me its a great movie tho (movie critics says its nonsense and lame) im not a horror genre lover but i like it

Why does the shaman throws his guts up when seeing the woman in white towards the end of the movie?

Why does the shaman in the end of the movie takes photographs? What are those other photographs inside the box?

Why does the corpse inside the wrecked truck starts moving when the shaman is casting away the demon from the girl?

Yogesh odyssey opera Oct 23 2015 5:23 pm Anticipated for its release. actually I thought he would make a conclusion or a trilogy to end his chasing(chaser, the yellow sea) duology. Anyway it is Korea's most wanted director's movie. regards from India.