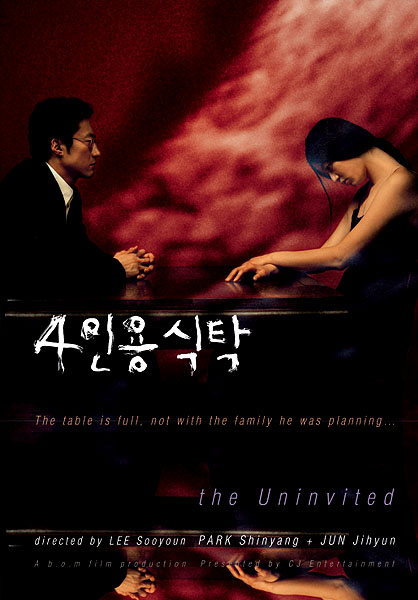 Jung-won is an interior designer whose wedding date is approaching fast. While spending the night in his and his fiancee’s new home that he decorated himself, he sees ghosts at the brandnew dining room table. Suddenly, his life is thrown into a maelstrom of shock and terror. He meets a mysterious woman named Yun. A narcoleptic, Yun often faints in the street. Once she meets Jung-won, she slowly begins to reveal her innermost self. Yun tells Jung-won about her ability to see spirits, and he talks to her about his supernatural encounters that he has been unable to share with his fiancee. Much to his surprise, Yun ends up drawing him into even greater, unimaginable horrors.

Pavel Greco Dec 20 2013 8:02 am 'Uninvited' is not dramatic, I'd rather say it's devastating. And yet it still remains an umbearable masterpiece. The pace, the use of music, the acting, the narrative style, the editing, the photography. A flawless creation like this comes only from deep, sustained inspiration.