The Sinking of Japan 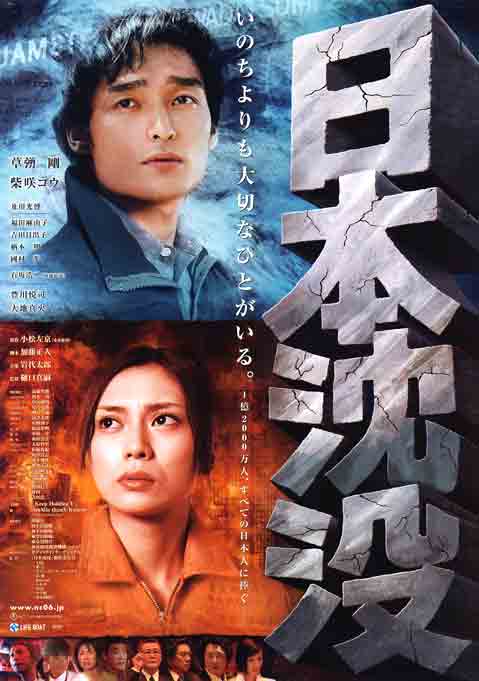 The global scientific community has discovered that in less than 40 years the archipelago of Japan will sink, due to a collision of tectonic plates. A massive plan for the exodus of a nation’ s population gets underway as Prime Minister Yamamoto (Kenji Ishizaka) prepares for a diplomatic mission to plead with foreign governments to accept waves of Japanese over the next few decades. He appoints a woman in his cabinet, Saori Takamori (Mao Daichi), to serve as his Minister of Crisis Management and Disaster Prevention. Kouzi Ishizaka & Etuzi Toyokawa

In the underwater trenches off near the Cook Islands, Tetsuo Onodera (Tsuyoshi Kusanagi) pilots a submersible vessel under leading geoscientist, Yusuke Tadokoro (Etsushi Toyokawa). Only days before, Tetsuo had saved the life of a young girl, Misaki, (Mayuko Fukuda) in a massive earthquake thanks to a heroic female rescue worker, Reiko (Ko Shibasaki). A bond begins to form between them. But now Tetsuo’ s boss, Tadokoro, has stumbled upon evidence that Japan’s disintegration will occur much more rapidly − in 338.54 days! The government is alerted, but Tadokoro’s theory is dismissed as alarmist.

The earthquakes, tidal waves and volcanic eruptions come in rapid succession, plunging the nation into panic. When the Prime Minister perishes in an airplane accident, it throws the cabinet into disarray. Amid the leadership vacuum, Saori Takamori, finds herself center stage in the crisis but helpless in the face of mounting losses of life and insufficient evacuation efforts. She turns to Tadokoro, her ex-husband, for advice: “Just tell me how we can save even 1,000 lives, 100 lives, even one extra life… and I will do it.”

Tadokoro offers a last ditch plan to save what’s left of the country: to manually perforate the plate that is dragging Japan down by detonating several strategically placed “N2” explosives, and hopefully causing the plate to separate. A multinational fleet arrives to help with the operation, but the loss of a critical detonator deep beneath the sea foils the effort.

Meanwhile, a spiritual bond develops between Onodera and Reiko, both of whom feel compelled to look after Misaki. When Onodera is offered safe haven in England as an ocean researcher, he asks Reiko to join him. But Reiko’s dedication to her job compels her to refuse. “I couldn’t live with myself.” Struck by Reiko’ s dedication to human life, Onodera decides to pilot the only vessel that can recover the last critical detonator, though it means he may not come back alive. “There are lives I have to protect,” he tells Tadokoro, “whatever the cost.” Much of the archipelago is already under water. It’s up to one man to salvage what’s left of a nation.