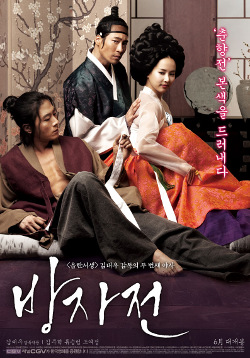 "A Story of Bangja" is based on the popular South Korean folktale "Chung Hyang." The movie then twists the story around to ask what would happen if Lee Mong-Ryong was unattractive, while his servant Bang Ja Jeon was attractive? During Lee Mong-Ryong's courtship with Lady Chun Hyang both parties use their servants to communicate ... mae Sep 29 2018 10:44 pm anita brown...the song is titled chunyang..depicts of the girl's name for he dedicate it to her...its also a very famous pansori song or korean folk song coz it relays the message of love between her love for her husband and her even they are forced to be apart....

Mar Jul 06 2015 1:31 pm I am so sorry for your lost. I hope this message gets to you. I truly admire your work as an actor and entertainment artists at 2d1n. Me and my family will pray for you. Thank you so much for your art.

Gasenadi Mar 27 2012 10:04 pm Absolutely, Hannah. This is not a comedy. And I thoroughly enjoyed the manipulation of the original legend and this version's explanation of it. Korean movies, ever surprising the viewer with twists and surprises. The cinematography is also stunning. Hope you enjoy it as much as I did.

flyn Jan 09 2012 10:17 am This movie was just okay... I didn't feel moved at all through the whole thing. Choon-Hyang was just a total player. I don't know why that servant even liked her -_-;;; The only thing good about this movie was the interesting manipulation of the original story.

Hannah Jan 03 2012 2:09 am Whoever edited this page is wrong saying this movie is a comedy.... No way in any shape or form is the movie a comedy. I cried at the end... It's a very good movie and I advise people to watch it!