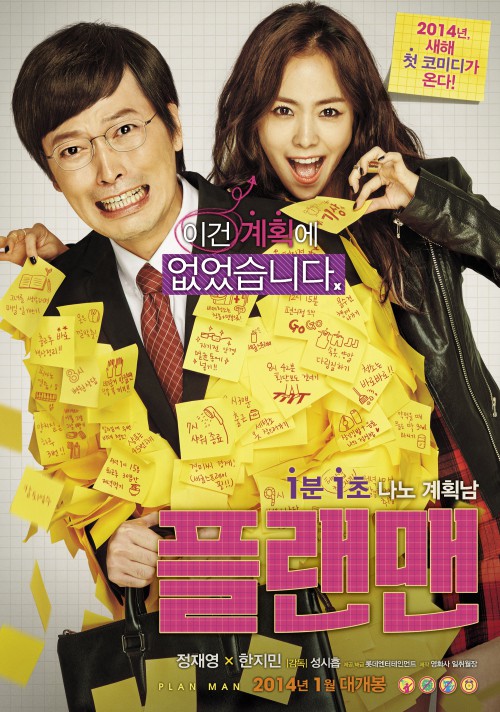 Jung-Suk (Jung Jae-Young) meticulously plans for everything in his life like waking up at 6:00 AM and then arranging his bed by 6:35 AM. He also suffers from a fear of germs and always carries various disinfectants with him. He works as a librarian. Jung-Suk also has a secret crush on Ji-Won (Cha Ye-Ryun) who works at a convenience store near the library. Ji-Won also has obsessive–compulsive disorders like Jung-Suk.

Jung-Suk finally decides to reveal his feelings to Ji-Won by giving her a diary he has written in daily. To his surprise, Ji-Won is not working that day and a woman named So-Jung (Han Ji-Min) is working there. Jung-Suk panics and leaves the store without his diary. Later, he goes back to get his diary and learns So-Jung will appear at a night club later that night. At the nightclub, Jung-Suk hears So-Jung sing a song called "Plan Man" which describes things he wrote in his diary. Soon, So-Jung asks Jung-Suk to take part in a TV music talent show.

Tari Mushati Jul 21 2018 12:29 pm A surprising movie. The plot line was smooth and despite the light hearted -ness of this romcom the writer and actors did a superb job of not undermining the complexities of the leads compulsive disorders. Whilst watching initially for the romance I was surprised that this movie had me crying as our main lead finally faced his past and ohhhh I wanted to jump out into the screen and hug the poor man. Thats great acting on Jung-Jae Young. Surprisingly got more than I bargained for in this movie. I recommend watching in the rain or on a lonely day, it gives you faith in humanity and cheers the spirit up a bit.

Joonhyuk May 18 2018 12:49 pm I didn't know Jimin can sing lol! I love the songs in the movie and I find Jaeyoung and Jimin cute together.

Sensei_R Nov 15 2017 5:32 pm They mark anything different as a "disorder" just to make money so they can drug you up and make a ton of money while you die from the drugs.

firenze Sep 05 2015 10:24 pm wow! such a wonderful feel good romantic-comedy movie. Light but very interesting and entertaining! Great story / script. The songs were all nice, I like the melody of it. All the actors were fantastic! Great acting job Jung Jae-Young and Han Ji-Min (",) Congratulations to the entire production staff.

Who knows the piano piece, Jung Jae-Young played in the movie?

ace Jan 15 2015 3:58 pm Quite a charming movie. The cast was very well chosen. Not just the two leads either, even though they were great together. But the secondary cast was good as well. The writing hit the right notes at the right time. The laughs come at just the right pace so it never felt uneven. Everyone got a chance to make me smile and succeeded.

Nick Jun 11 2014 11:18 pm I love this movie. I watched it twice without understanding the dialogue. The plot is simple but compelling. I am looking for a version with English subtitles. It demonstrates the ironies in life and that even a person with serious issues can overcome their problems. Jung Jae-Wong is outstanding playing all the phobias to extreme.

Excalibunny Nov 11 2013 9:59 am The plot of this movie sounds simplistically awesome. I always love it when the writer puts a man and woman with conflicting personalities, and make them fall in love. I'll hope to see this movie soon. Oh, and the Gothic Ha Ji Min looks irresistibly seductive. Love ya!